By team eninrac
Japan will develop  commercial scale supply chains by around 2030 to procure 300,000 tonnes of hydrogen annually and ensure that the cost of hydrogen reaches 30 yen/Nm3
JAPAN

BASIC STRATEGY  FOR REALIZING A HYDROGEN BASED SOCEITY

A. Realizing low-cost hydrogen use –
Japan will develop commercial scale supply chains by around 2030 to procure 300,000 tons of hydrogen annually & ensure that the cost reaches 0.26 USD /NM3. In the later future , Japan will try to lower the hydrogen cost to 0.17 USD/NM3  to allow hydrogen to have the same cost competitiveness as traditional energy sources.

Japan will demonstrate a liquefied hydrogen supply chain by the mid -2020s for commercialization around 2030.

Japan will attempt to develop and commercialize power to gas systems by around 2032 and reduce the cost of hydrogen from renewable energy to as low as that of imported hydrogen in the later future.

The utilization of unused regional resources (including renewable energy , waste plastics , sewage sludge and by product hydrogen) will contribute not only to expanding the use of low carbon hydrogen but also to improving regional energy self sufficiency rates

D. Hydrogen use in power generation


E. Hydrogen use in mobility


Japan will aim to achieve net zero greenhouse gas emissions by 2050. To decarbonize its economy Japan is increasingly looking to future fuels such as hydrogen and innovative technology

F. Potential hydrogen use in industrial processes and heat utilisation

CO2-free hydrogen can (a) be used as fuel for energy areas where electrification is difficult, and (b) replace industrial-use hydrogen from fossil fuels, contributing to cutting carbon emissions

With an eye on 2050, it is necessary to develop innovative technologies for highly efficient water electrolysis for hydrogen production as well as low-cost, highly efficient energy carriers and highly reliable, low-cost fuel cells

It is necessary that the understanding of the safety of hydrogen and the significance of hydrogen use is shared among citizens. To this end, the central government will adequately provide information in cooperation with local governments and business sectors


Government of Japan and New Zealand has signed a Memorandum of Cooperation on green hydrogen in 2018. The Memorandum seeks to encourage industry and research institutes to collaborate in the field of hydrogen 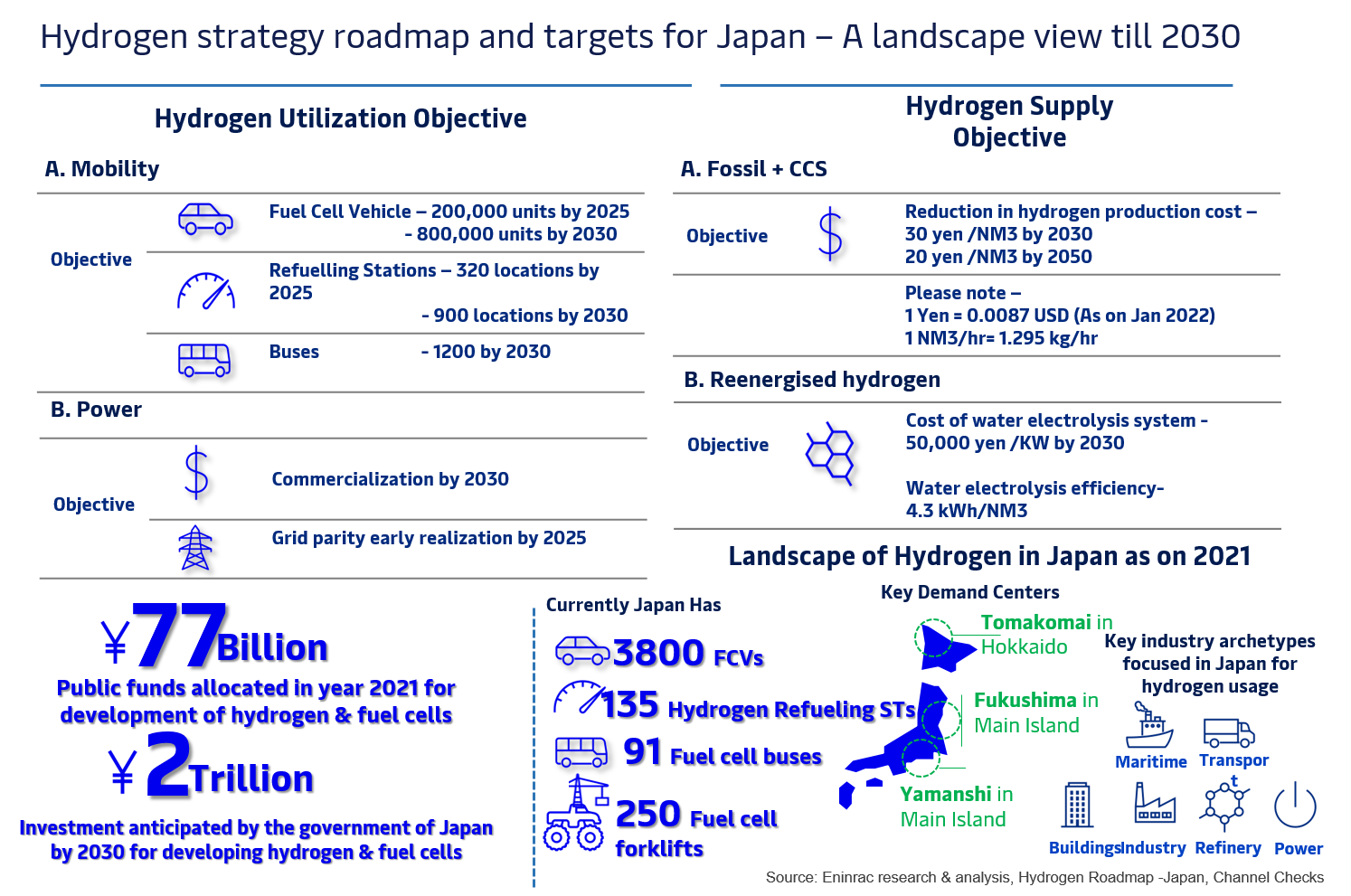 South Korea is betting big on hydrogen. The market size of Korea is anticipated to reach Korean Won (KRW) 26.8 Trillion by 2030

The hydrogen economy is of key strategic importance to Korea, a country lacking in both conventional and easily exploitable renewable energy resources. Its industrial gases industry has long been influenced by Japanese, American and German technologies and standards, but as hydrogen begins to play a more transformative role in the broader economy, Korea is keen to ensure it has greater control over the technologies and standards that will underpin that transition. Building on this, the Korean government announced its Hydrogen Economy Roadmap in 2019. The roadmap aims to deploy 15GW of utility-scale and 2.1GW of commercial and residential fuel cells by 2040. In terms of mobility, the goal is to have 5.9 million fuel cell cars and 60,000 fuel cell buses on the road by 2040 all supported by 1,200 hydrogen refuelling stations.

The announcement of Korea’s Green New Deal in July 2020 - a coronavirus stimulus plan outlining KRW 74 trillion (£47bn) in ‘green’ public-private capital investment by 2025 - should help the country on its way to achieving these aggressive long-term goals. Korea’s hydrogen industry is forecast to almost double in size from KRW 14.1 trillion (£9.1bn) in 2020 to KRW 26.8 trillion (£17.3bn) by 2030. This growth will be driven by investments from large local players such as Hyundai and Doosan who increasingly see hydrogen as a key growth engine. Hyundai Motors intends to spend KRW 7.6 trillion (£4.9bn) under its ‘Fuel Cell Vision 2030’ programme and looks well placed to capitalise on its early-mover advantage in fuel cells, both by selling its own vehicles and by licensing its fuel cell systems to OEMs around the world. 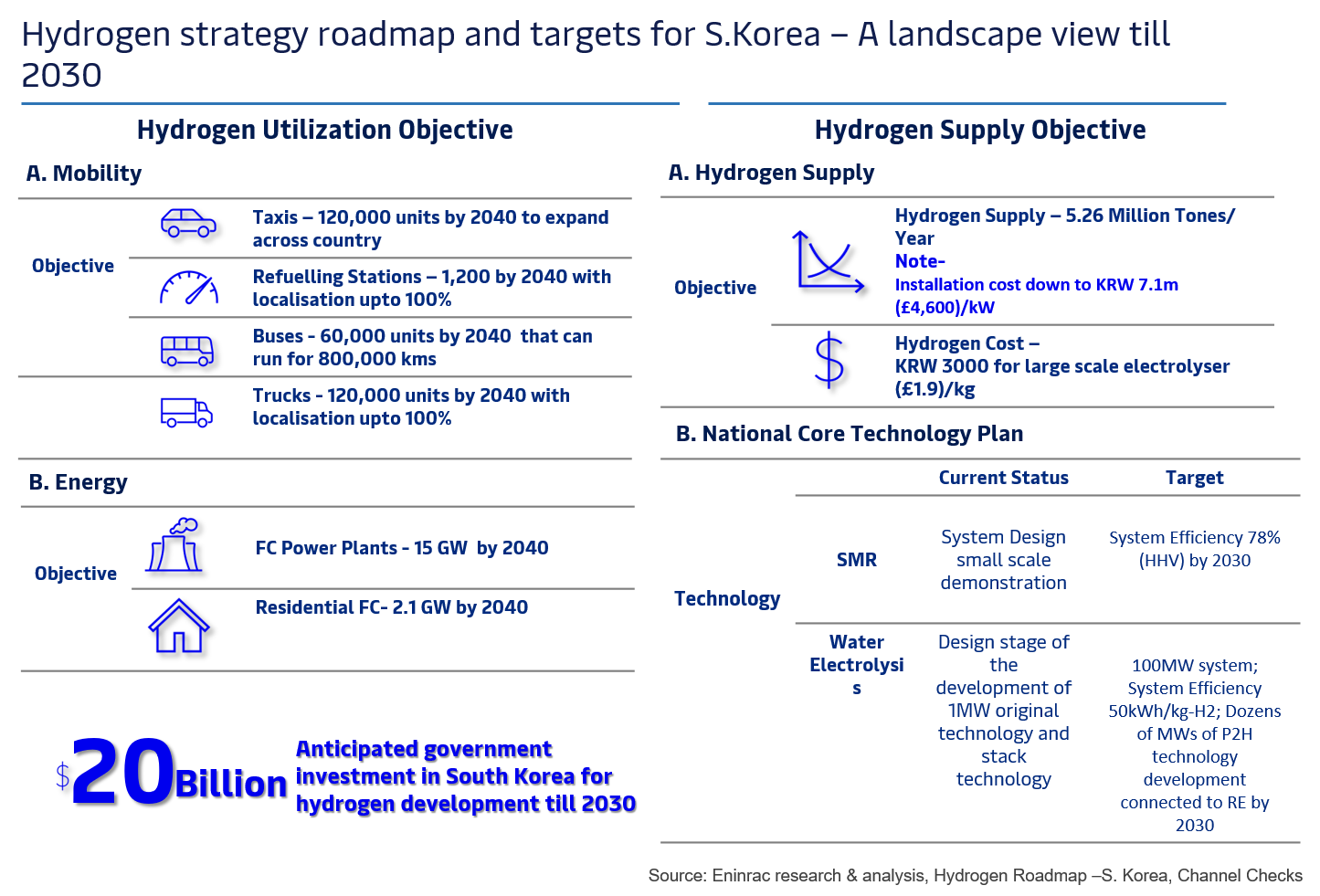 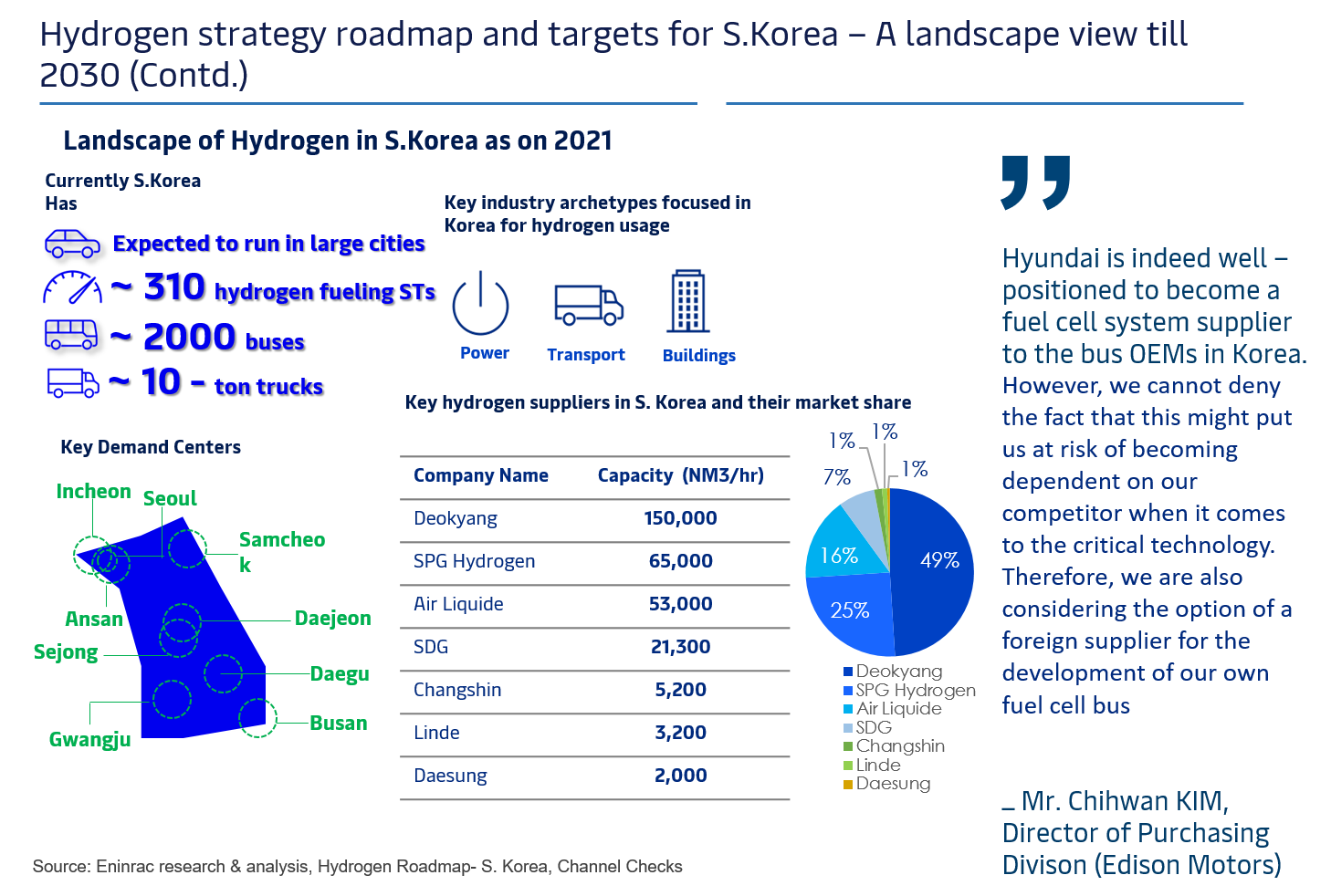 Hydrogen is gaining increasing attention from industries and policymakers in China. However, most of the current demonstration projects in the country have relied on conventional sources, including industrial by-product hydrogen and grey hydrogen produced from fossil fuels. The Chinese government at various levels has actively promoted hydrogen energy development. As of 2019, out of 34 Chinese provincial administrative regions, 17 (plus at least 22 municipal administrations) have published policies to develop hydrogen energy-related industries and infrastructure; this is complemented by more than 10 policy documents issued by the central government of China.

vehicle purchase subsidies, the scheme rewards clusters of cities based on a series of parameters. To be eligible for financial rewards, city clusters must deploy more than 1 000 FCEVs that meet certain technical standards; achieve a delivered hydrogen price at a maximum of (Chinese Yuan) CNY 35.00/kg (~USD 5.00/kg); and provide at least 15 operational hydrogen refuelling stations (HRSs). Based on the plan and how well objectives are met, a maximum of CNY 1.5 billion (~USD 220 million) will be transferred to each selected city cluster between 2020 and 2023.

The Asia-Pacific region currently accounts for half of global industrial hydrogen demand, with China alone taking a major portion (17 Mt H2) for ammonia and methanol production. With growth across all sectors, China accounts for almost two-thirds of Announced Pledges Scenario hydrogen demand. 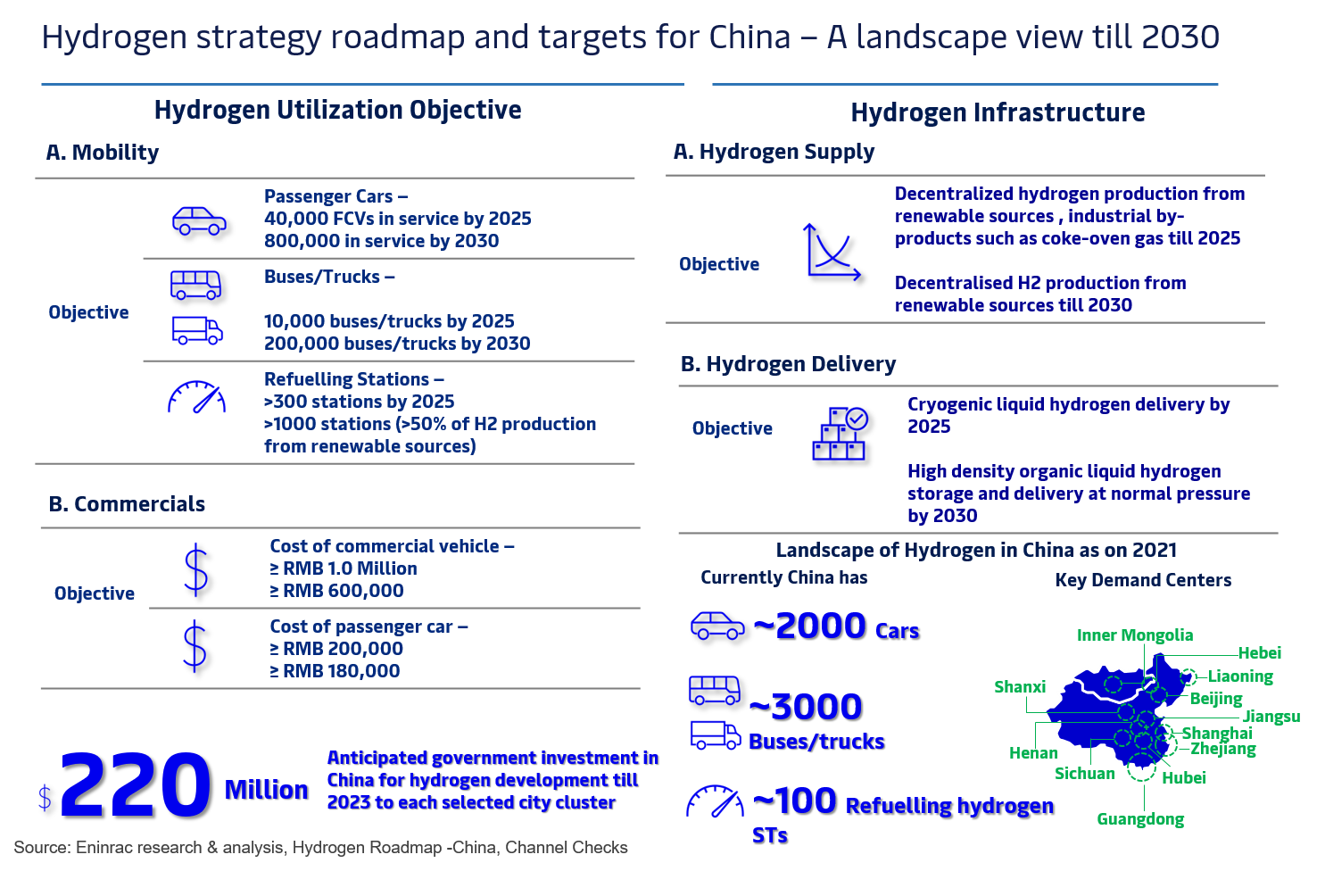 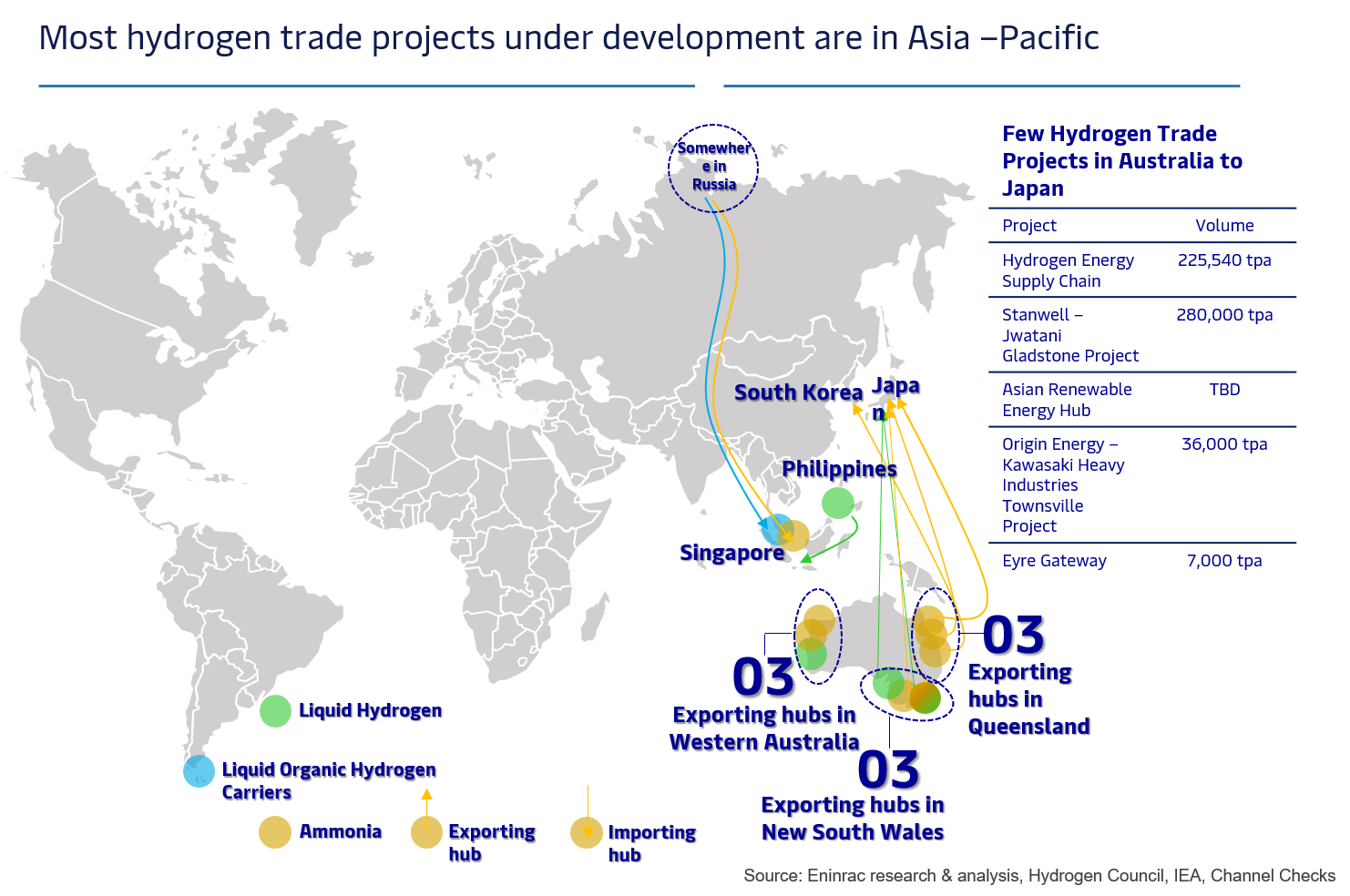 India and Italy have agreed to explore development of green hydrogen , setting up renewable energy corridors and joint projects in the natural gas sector

On 15th August 2021 Honourable Prime Minister of India – Mr. Narendra Modi flagged the launch of National Hydrogen Mission and announced to transform India into a global hub for green hydrogen production and export. Further, the country is also focusing upon having international tie-ups for developing green hydrogen. The mission envisages commercial production of green hydrogen production in India from financial year 2025-26 onwards. The draft proposes to undertake hydrogen production projects through a competitive bidding mode which would be open to participation from both public and private entities. Further, the mission includes frameworks for indigenous  manufacturing and research & development aimed at improving the efficiency of electrolysers – systems that use electricity to break water into hydrogen and oxygen in a process called electrolysis

Among other provisions, the mission includes a framework for demand creation of green hydrogen through mandates in identified sectors. As for current capacity in the nation, a green hydrogen project with a production capacity of one tonne per day has been established at Bikaner, Rajasthan, under the private sector. Further, under a Research and Development project supported by the Ministry of New and Renewable Energy, a 5 Nm3/h (normal cubic meter per hour) green hydrogen production plant based on solar energy-powered electrolysis has been established at the National Institute of Solar Energy. 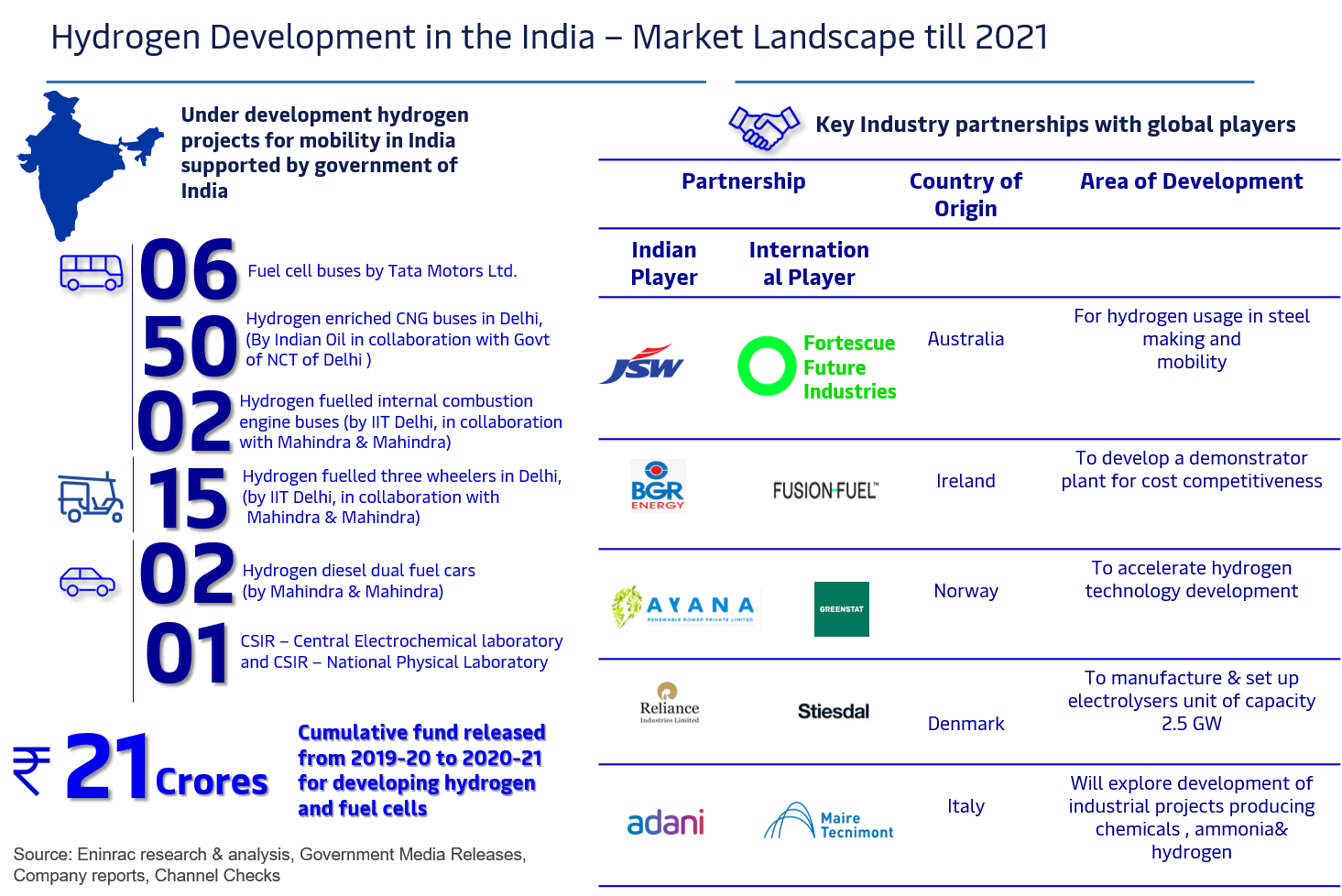 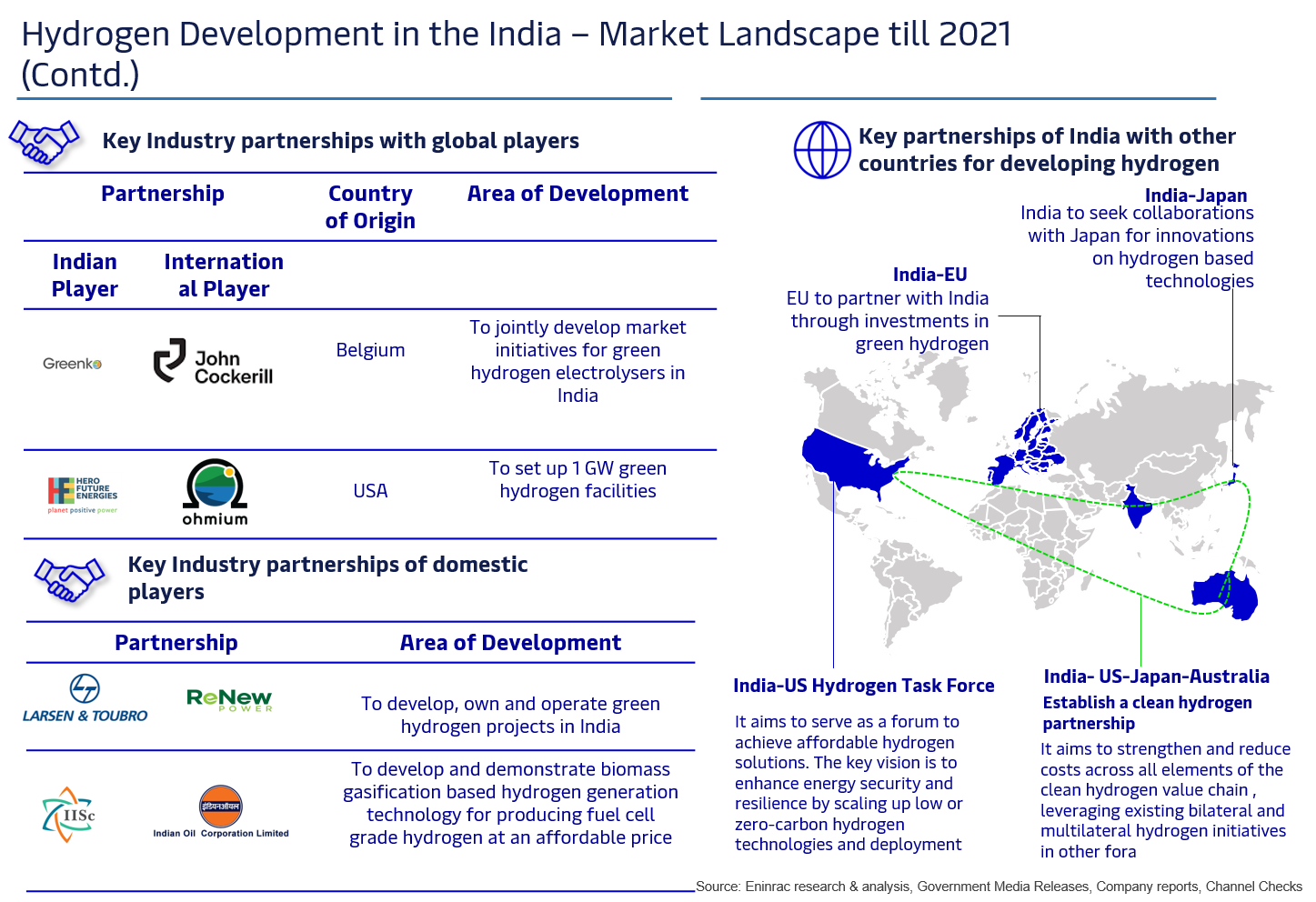