Renewable Energy Market in India 2022 – A know how​

The overall renewable energy installed capacity of the world from 2016 to 2022 has reached 2006GW - 3300GW and India ranked 4th globally for the overall installed capacity of renewable energy after China, USA (325GW), and Brazil (184GW). China is the table topper with a capacity of 1063 GW in 2021, and a 33% YOY growth scenario has taken the RE capacity of China to 1414 GW in 2022. India’s overall RE installed capacity is 168 GW (121 + 47 hydro) as of December 2022. India has surpassed Germany, Japan, and Canada in terms of installed RE capacity, with a gap of 11 GW, 21 GW, and 43 GW respectively. This energy gap may continue to increase as more investments are made in India in comparison to these three countries. China is the only country in Asia ahead of India in RE-installed capacity, with a huge energy gap of more than 1000 GW. So India has to come up with high capacity addition targets and massive investments to surpass China in RE capacity addition.​

The Indian RE capacity has grown from 74 GW in 2018 to 120 GW in 2022, at a CAGR of 10% YOY. This growth rate of RE is primarily driven by the two main sources: solar and wind, which cumulatively capture almost 87% of the total RE install capacity as of CY 2022. Solar energy has contributed 52% of the total share of RE capacity, and wind energy has contributed 35%. The top players that are involved in RE generation are Tata Power, Adani Green Energy, Waaree Renewable, Renew Power, and Suzlon. These players have a market capitalization (in INR) of 66,367 cr, 3,431,25 cr, 170 cr, 1,023 cr, and 11,273 cr, respectively. The top five states in India, which have the maximum RE installed capacity and received the highest investment by the RE players, are Rajasthan, Gujarat, Maharashtra, Karnataka, and Tamil Nadu. These states have an installed RE capacity of  20GW, 18GW, 11GW, 16GW, and 18GW respectively. 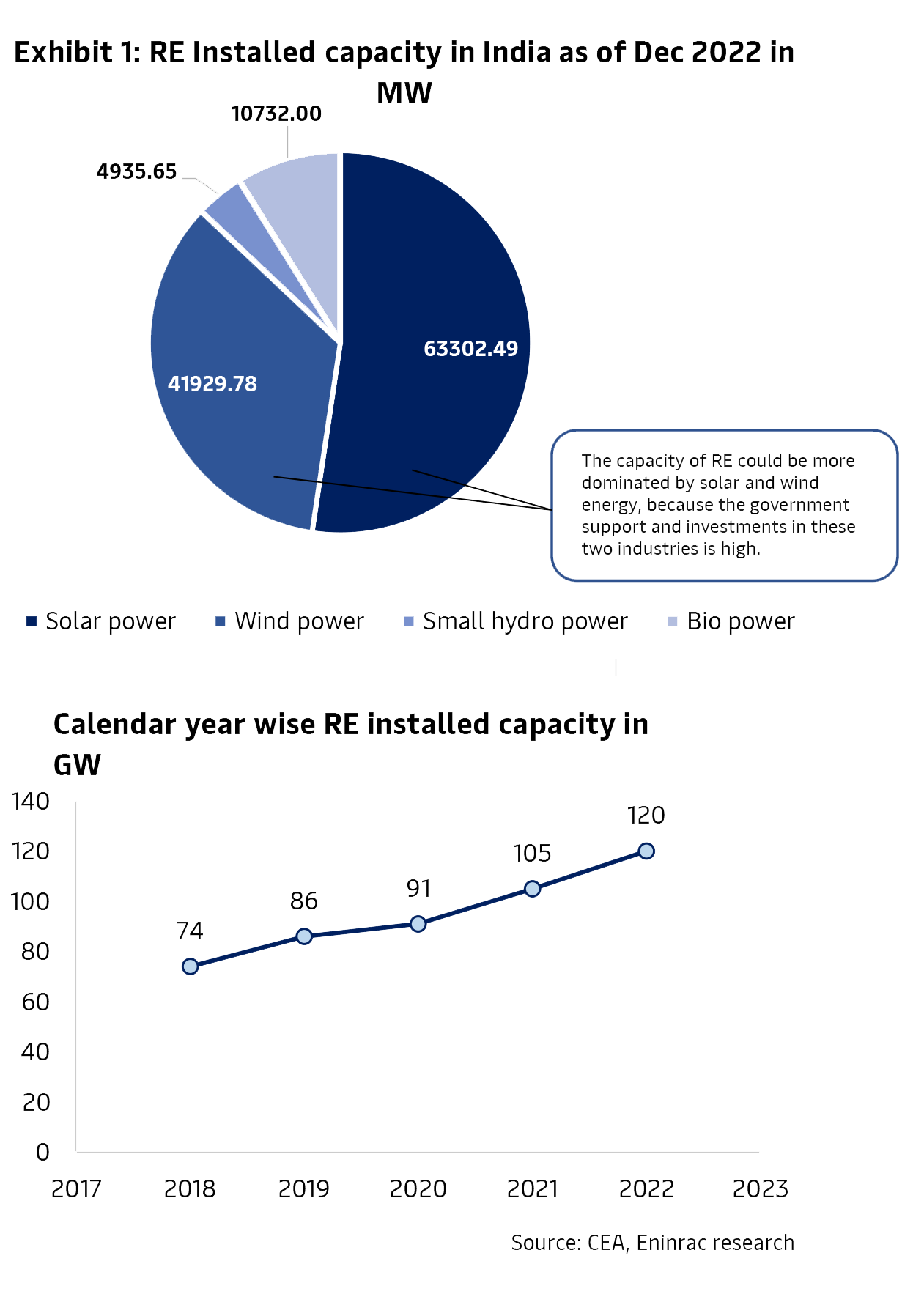 Why is the Indian RE sector gaining attention from domestic and cross-border players?​

The Indian government has set a target of 500 GW of renewable energy capacity by 2030. If we assume business-as-usual in RE capacity addition until 2030, we will only have 200 GW of capacity by 2030, with a YOY growth of 10 GW. In order to meet the target, India must add at least 48 GW of RE capacity YOY. Major policies that are provided by the government to achieve the target are the PLI scheme, the RE-RTD program, the offshore policy, etc. Different state governments are also offering incentives to domestic and international private players to invest in and build RE plants in their respective states. Investment in India's renewable energy sector increased by more than 125 percent year on year to 1450 crore in the fiscal year 2022, and it is expected to exceed 12500 crores following the G20 summit. To expand the renewable energy market in India, Gujarat and Rajasthan have emerged as two of the country’s top states for attracting corporate investments, inviting investments worth INR 3.98 trillion and INR 2.91 trillion, respectively, in FY 2022.

While Gujarat gains from its location along the western coast and a 1600-km-long coastline, Rajasthan also shares a border with some of India’s most populous states, giving it access to 40 percent of their markets. particularly in the wind & solar sectors. Different states in India, like Chhattisgarh, Jharkhand, Assam, Gujarat, and Pondicherry are promoting  RE by providing easy clearances on land acquisition, generation and transmission incentives and policies, and much more. The first offshore wind project in Gujarat has been proposed by the government, in which 35 international Indian players have participated in the bidding. This step will bring foreign players' business to India. International funding has also been indulging in RE as SECI and the World Bank signed agreements for a ₹12,427,912,650 IBRD loan, a ₹2,317,014,392 Clean Technology Fund (CTF) loan, and a 1,821,040,320 CTF grant to help India increase its power generation capacity through cleaner, renewable energy sources. The agreement underscores the Government of India’s commitment to achieving 500 gigawatts (GW) of renewable energy by 2030 to address the challenges of climate change. The government has also developed GEC (Green Energy Corridor) projects that have been longed for by the government to facilitate renewable power evacuation and reshape it for future needs. The second component of the intra-state GEC, with a target capacity of 9700 circuit km of transmission lines and 22,600 MVA capacity sub-stations, is expected to be completed by March 2023. The intra-state GEC Phase-II (GEC-II) scheme was approved by the CCEA in January 2022. The total target is 10750 km of intra-state transmission lines and 27500 MVA of sub-stations, with a scheduled commissioning timeline of March 2026.

By Ayush Shrivastav - Ayush is a business analyst working in the Electric Utilities & Power domain at Eninrac.

For any customized market research, consulting & advisory needs drop a query at - connect@eninrac.com