Power Transmission Sector in India – A know how

India's Power Transmission networks constitute the vital arteries of the entire power value chain. It goes without saying that the growth of power sector is contingent to development of a robust and a non collapsible transmission network. Over the past decades, the total power capacity has witnessed commendable growth, with more than 401 GW of generation capacity currently installed in India. However, India's peak load supply is only 204 GW, and aggravating this situation further is that some of India's power surplus regions do not have adequate power evacuation infrastructure which could alleviate the recurring supply shortages in other parts of the nation.

Though, significant efforts in terms of providing smooth policy & regulatory framework along with massive investments have been planned in the past for strengthening the power transmission infrastructure in country. But, continuous cases of congestion in the transmission lines witnessed in the recent past is a testimony of much more efforts are still required to pull up the transmission segment in the country. The issues related to generation and distribution sectors, rightfully, got due focus from policy makers and industry stakeholders.

Transmission which is the critical link of power supply with no fall back option got down played due to multiple reasons. Despite of all the fall back, India was able to achieve “One nation one grid” in 2013. This has been achieved by integrating all the five regional electricity grids into one interconnected & synchronous national electricity grid. Further, inter regional links have been augmented from 35.9 GW in 2013 to 112.2 GW as of Feb 2022.

Commensurate with the generation capacity addition plans, transmission and distribution network has also been planned to facilitate power reaching the ultimate consumer. Additionally, green energy transmission corridors have also planned by the GoI for better evacuation & integration of increasing renewable energy capacity in the grid.

Presently, India boasts a power transmission line network of 4,57,416 circuit kilometres (ckm) as of April 2022, with a transformation capacity of 1,11,1768 MVA

Over the past two decades the power transmission network in India has witnessed a growth of close to 67% and has been expanded with a length of 3,05,147 ckm from a period 2002-2022. Maximum growth into the same was observed during the period 2012-17 with a capacity addition of 1,10, 370 ckm. Exhibit 1.1 indicates the year wise growth witnessed in power transmission network of India. 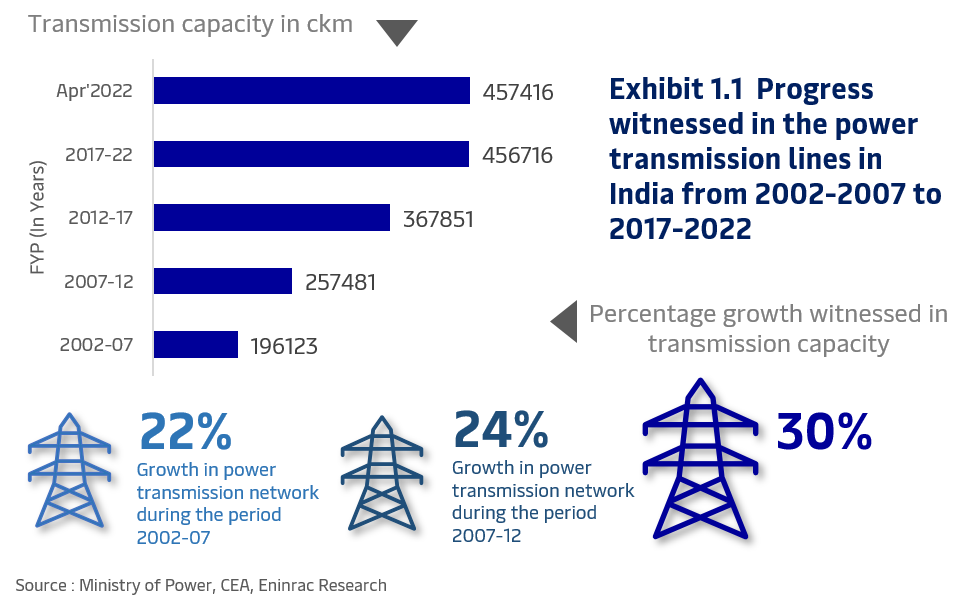 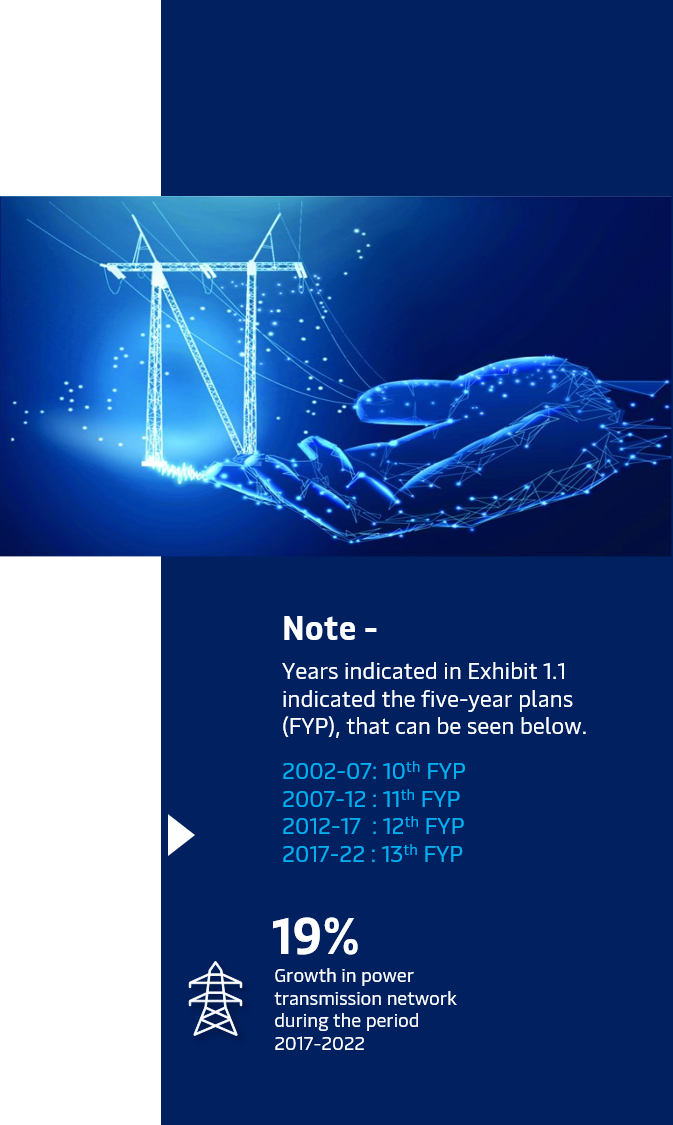 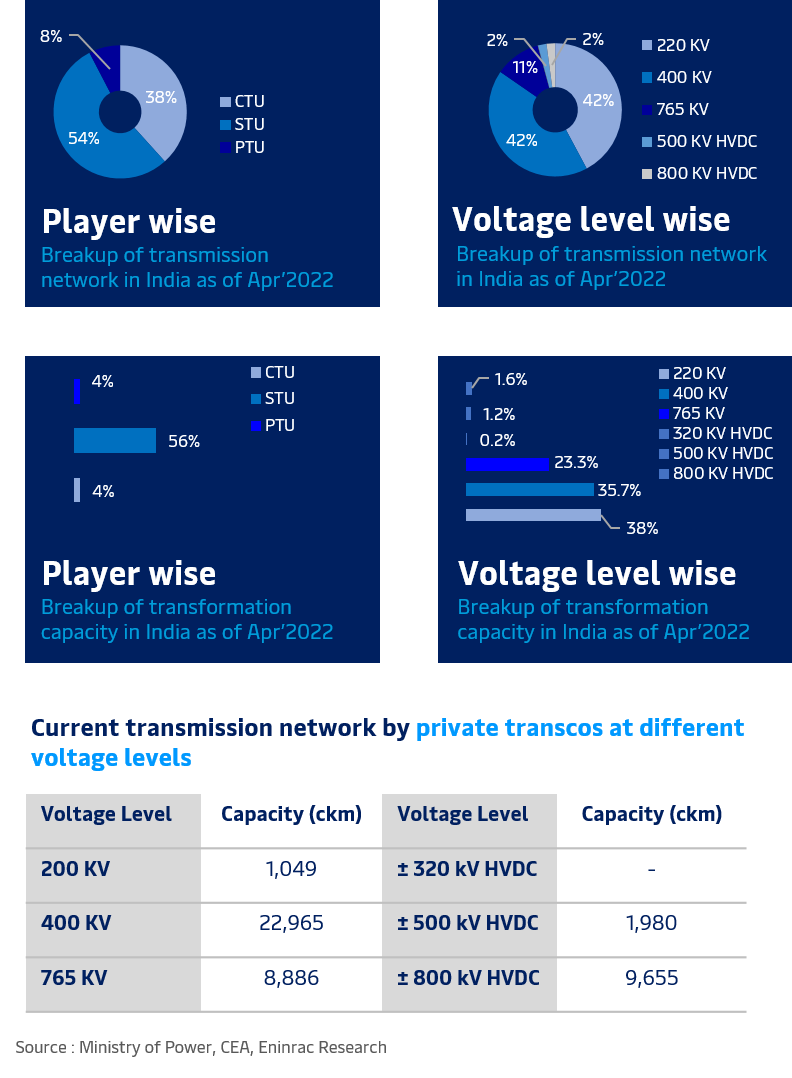 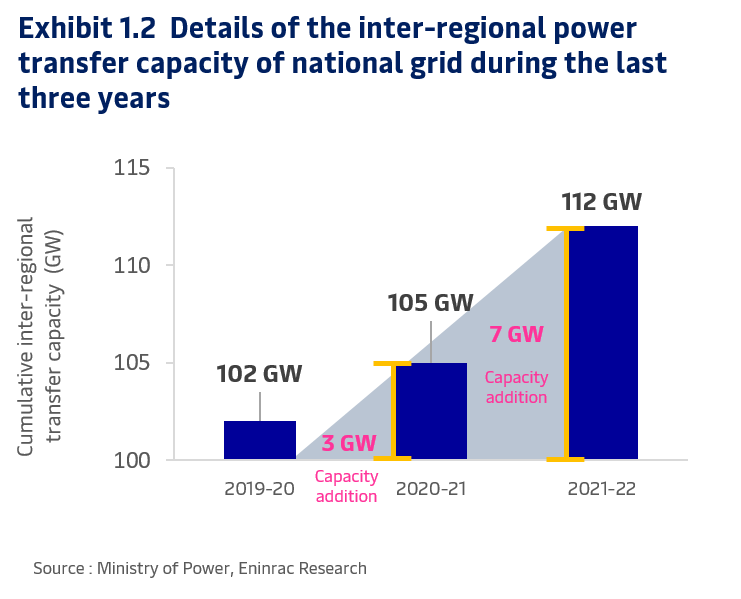 Although, over the past decade a lot of development has been observed in India’s power transmission sector. Having said so, some of major contributors to its transformation have been some landmark schemes/initiatives taken by the government of India. These are –

1. One Nation One Grid – To synchronise & strengthen all the regional grids have helped in optimal utilization of scarce natural resources by transfer of power from resource centric regions to load centric regions. ‘One Nation One Grid’ has already been achieved by integrating all the five regional electricity grids into one interconnected and synchronous National electricity grid in December, 2013. Further, inter-regional links have been augmented from 35950 MW as of Dec’2013 to 1,12,250 MW as of Mar’2022.

2. Green Energy Corridor (GEC) – The government of India has announced development of green energy corridor (GEC) – intrastate transmission system under two phases to ensure better grid integration of renewable energy capacity. Phase I of this scheme was announced in 12th FYP. The GEC phase I has a planned network length of 9700 ckm with a power transformation capacity of 22600 MVA. The targeted RE evacuation is 24 GW. The key states through which the phase I network shall pass are – Andhra Pradesh, Gujarat, Himachal Pradesh, Karnataka, Madhya Pradesh, Maharashtra, Rajasthan & Tamil Nadu. Phase I is anticipated to get completed by 2023. This shall further enhance the open access activities in these states in years to come. The year wise cumulative target and achievement made under GEC – Phase I scheme during last three years can be seen in Exhibit 1.3. Phase II of GEC has a targeted network length of over 10,000 ckm and is likely to be commissioned by 2025-26. 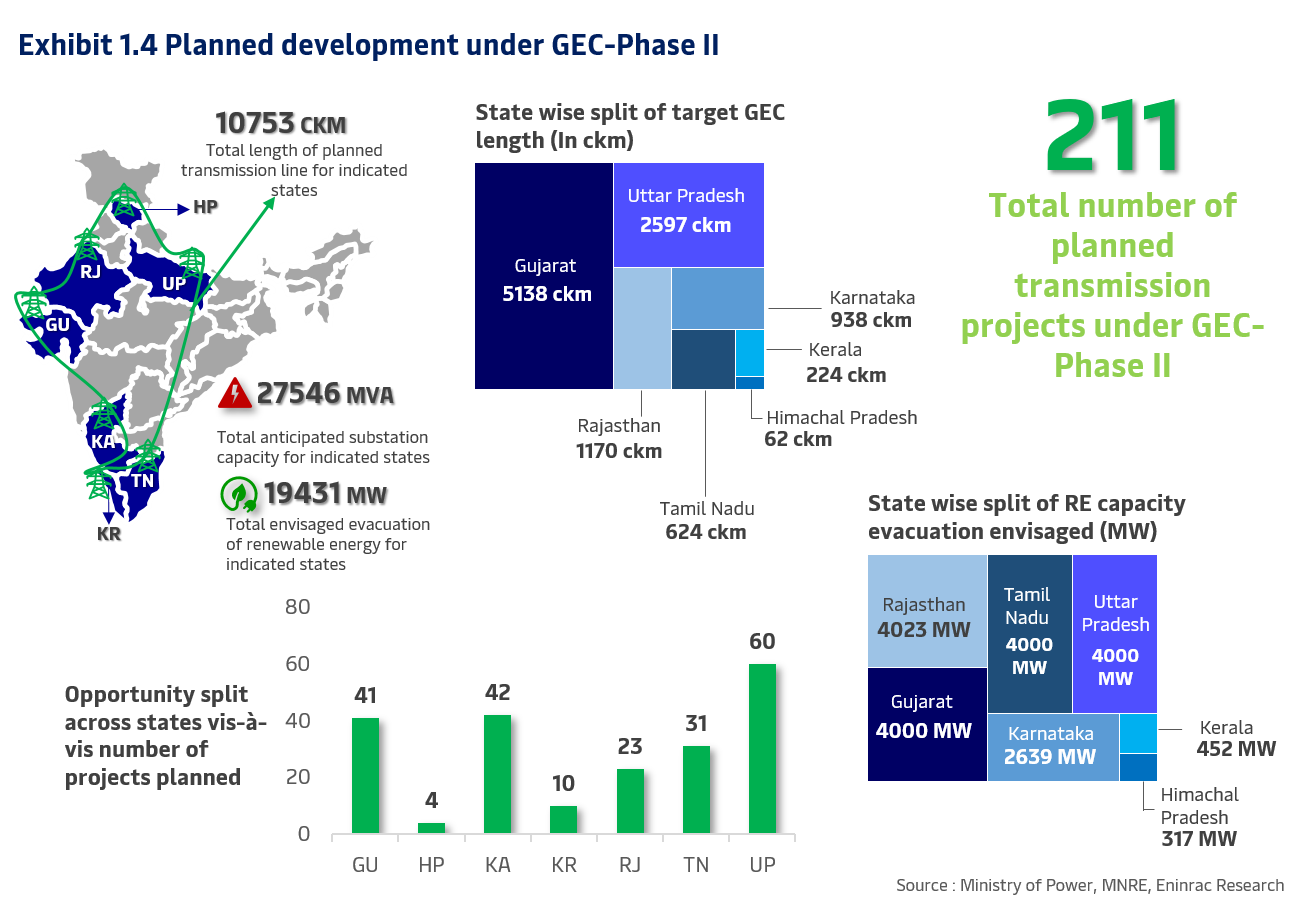