India is well endowed in terms of most minerals and the country’s mining sector has great potential. The country has vast reserves of both metallic and non metallic minerals including iron ore, bauxite, coal, limestone and manganese. India is among the top ten producers for these minerals globally and while the demand of these mined commodities has been strong domestically, the supplies for the same has been constrained. Some of significant reasons owing to such a case are – unavailability of high tech equipment for exploration, low presence of private players, absence of international mining giants etc. Coal not being an aberration witnesses such imbalances too in its domestic requirement and availability. 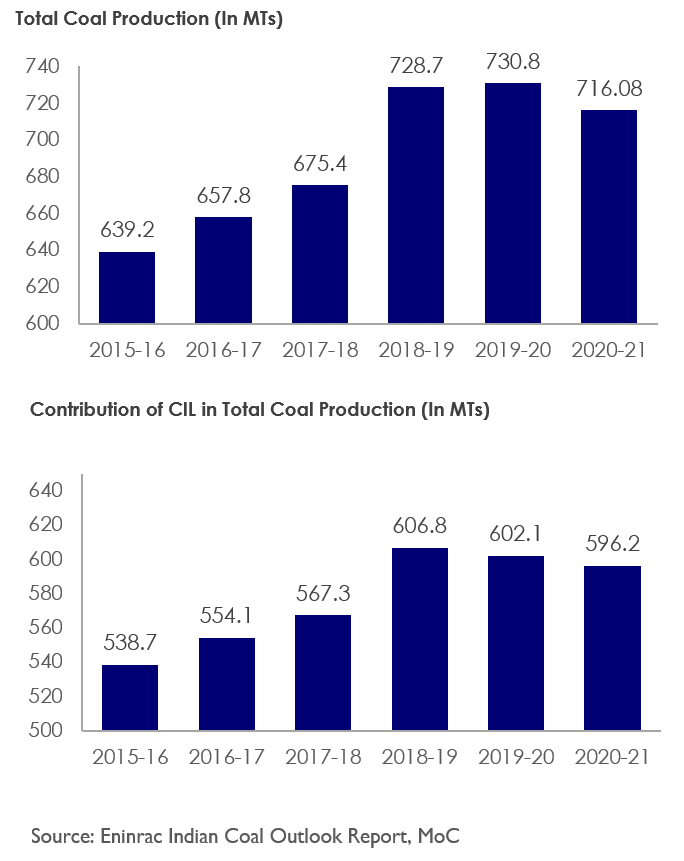 Listen to other Podcasts →


Coal is among the most mined mineral in India being a primary source of energy consumption. As on 2020, the total coal reserves in India hovered around 3.19 Million Tonnes (MTs) for coal seams of 0.90 meters and above in thickness and a depth of upto 1200 meters depth from the surface. The major share of coal reserves accounting to nearly 99.5% are in the Gondwana coalfields and 0.5% rests in the Tertiary coalfields. These tertiary fields are spread across the north – eastern states of Assam, Meghalaya and Nagaland, whereas the Gondwana fields span across the states of Jharkhand, Odisha , Bihar and West Bengal in the eastern region, Madhya Pradesh, Chattisgarh and Maharashtra in the western region and Andhra and Telangana in the southern region. The eastern state of Jharkhand holds the maximum coal reserves in India followed by Odisha and Chattisgarh. It is significant to note that during 2020 , the total coal reserves in the above mentioned states stands to be 83151.68 MTs , 79294.8 MTs and 57205.87 MTs respectively.

Coal production in India at large comes under the prerogative of Coal India Limited (CIL) and its subsidiaries. About 85% of the total coal produced domestically is being driven by CIL. Over the past few years there has been a consistent effort by the company to increase domestic coal production and a target to raise the same to 1 Billion Tonne by 2026 has already been set. Over the past decade overall growth witnessed in the coal production of CIL was approximately 38%. However, there were some variations witnessed with production levels increasing and falling. For example, during the period from 2010-11 to 2018-19, coal production by CIL increased consecutively and witnessed a growth of about 41% for the said duration. In year 2019-20, the production quantum of CIL declined marginally by 0.7%. The production volume further witnessed a decline by 1% in year 2020-21. The annual production target of CIL for 2021-2022 is 670 MTs, of which 292.8 MTs was produced upto September from April’2021. The coal production by CIL & its subsidiaries for the month of September ‘2021 has been observed to be 51.7 MTs 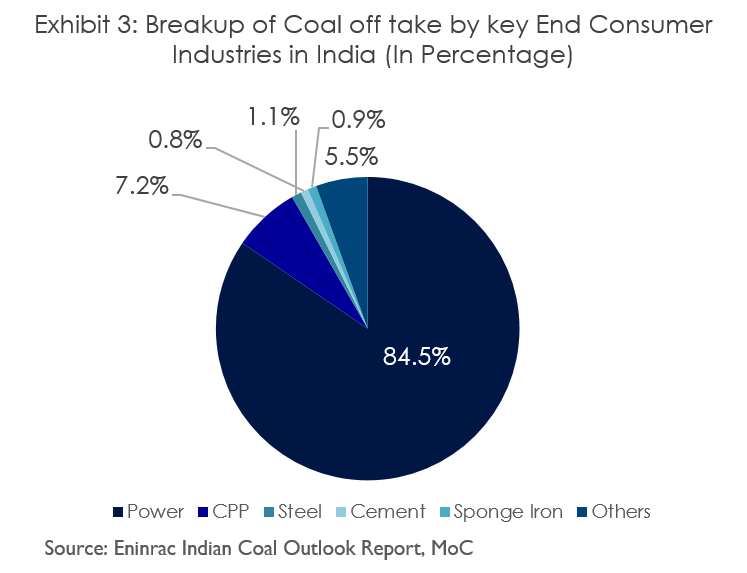 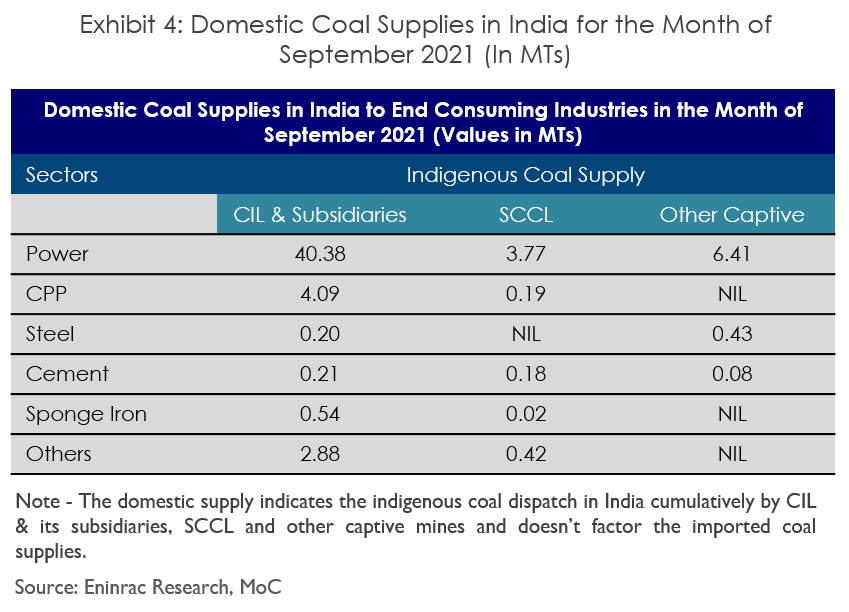 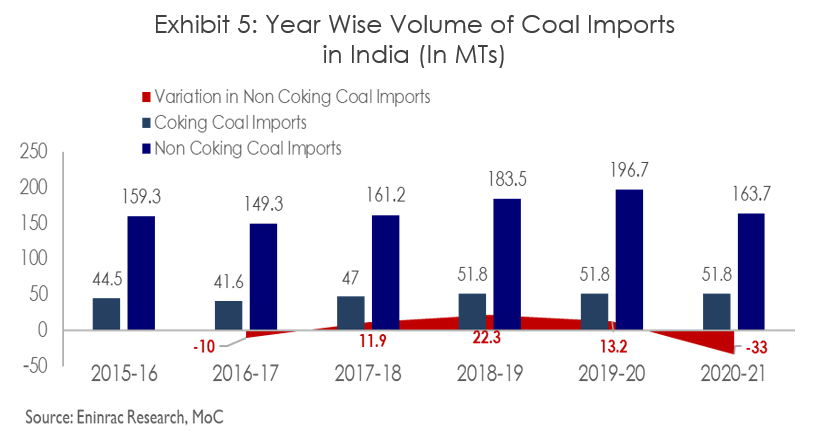 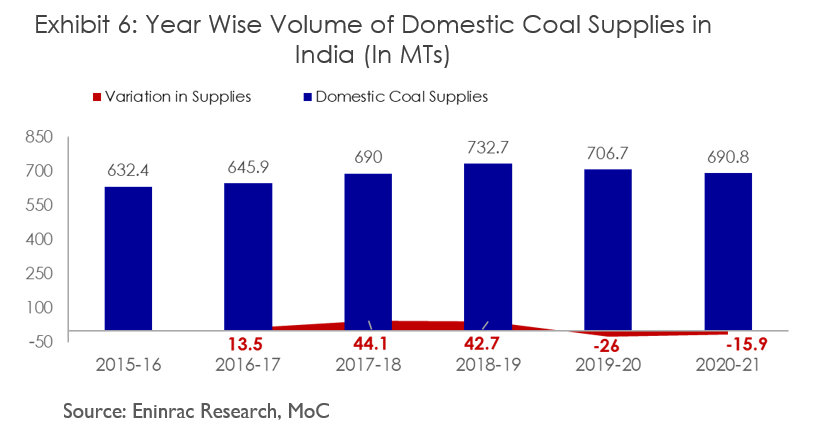 Globally, the demand for coal has been stalled has plateaued in the west. Whereas in eastern side of the globe, situation is different. A strong growth in the demand for coal is likely to be seen in the Asian countries such as India, Vietnam, Indonesia etc as it is one of the most preferred and reliable options for generating electricity in these countries. Imports in small pockets including Pakistan, Turkey & Malaysia shall also drive the demand but India being the centrifugal force is likely to witness a rise of close to 5% a year through 2021, while that in association with the southeast Asian nations will jump 7.2% a year. The domestic demand of coal in India has grown by 10% from FY’2015 to FY’2017. During FY’2017-18, the all India actual coal demand was 908 MTs against a domestic supply 688 MTs. While the same for FY’2018-19 hovered over 1000 MTs against a domestic supply of 732.7 MTs. For years 2019-20 & 2020-21, the domestic coal supplies was estimated to be 706.7 MTs & 690.8 MTs respectively.

India is also one of the major importers of coal across the globe. The countries that hold a significant share in meeting India’s coal requirements are – Indonesia, Australia, South Africa, Colombia, Mozambique, US & Canada. Indonesia has been the leading supplier of steam coal to India, but with the growing share of other countries its share has decreased. The country accounted for 78% of steam coal imports in 2014, with share of South Africa to be 15% and Australia to be 4%. Presently also Indonesia is the largest contributor to India’s coal imports but its share has declined. It is pertinent to note that as on 2019, Indonesia accounts for 50% of coal imports. Where as the share of South Africa and Australia increased to 22% & 18% respectively. During 2020-21, the total coal imports in India stood at 214.9 MTs. Of this, 163.7 MTs was the imported volume of steam coal (majorly used by power sector) , while 51.2 MTs was imported volume of metallurgical coal.

Power sector is the leading consumer of steam coal in India as electricity generation in the country is largely driven by the same. It is pertinent to note that during year 2020-21, the domestic supply of steam coal was 646.8 MTs and of this about 550 MTs was consumed by thermal power plants. 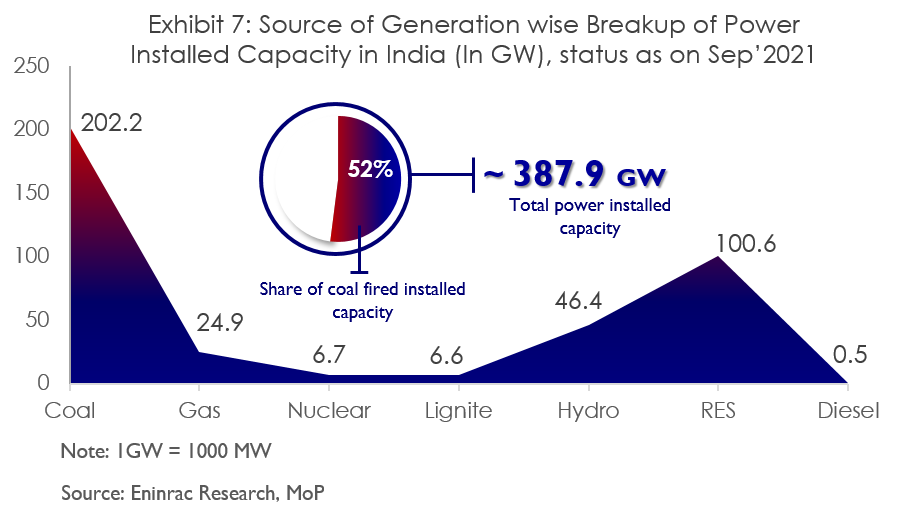 Over 50% of the power installed in India is driven by coal fired power plants that accounts a capacity of 202 GW in September 2021. Of this total capacity, private sector’s contribution is maximum and stands to be 73.5 GW. Ownership of states  owned thermal power plants is 65.9 GW followed by 62.7 GW of CPSUs (central public sector undertakings). In India, Maharashtra, Uttar Pradesh, Madhya Pradesh & Gujarat are the leading states w.r.t. coal fired electricity generation. The total coal fired installed capacity of these states as in September 2021 is recorded to be 26.3 GW, 19.7 GW, 16 GW and 15.9 GW respectively. Cumulatively, these states accounts approximately 39% of India’s coal fired power installed capacity.

Frequently Asked Questions
on - Shortage of Coal Supplies in India

For which reasons India is on a coal shortage ?

Why there is significant increase in the coal demand ?

Infrastructure development & industrial boom has been a major driver to the rapid economic growth and soaring  power demand in India. With the sentiments all high to boost domestic manufacturing capabilities and become ““Atmanirbhar Bharat”, further increase in the power demand levels is likely to happen.  Apart from the industrial and infrastructure development, a lot is happening on the clean mobility front. The GoI has successfully rolled out electric vehicles (progress in still on). Subsequent charging infrastructure is already in development to support the EVs. Also, we have electrification targets of Indian railway routes and the ongoing progress on the metro rail expansion front etc. All of this will further lead to rise in the power demand. Hence, the demand for coal will increase.

3 days of coal stock left, when normally its 14 days. What does it mean? What are its consequences ?

Lets first understand what does coal stock means. The coal stock is the planned inventory with thermal power plants for generating electricity. The shortage in the coal stocks is classified into two types –

These stocks vary as per the power plant types – 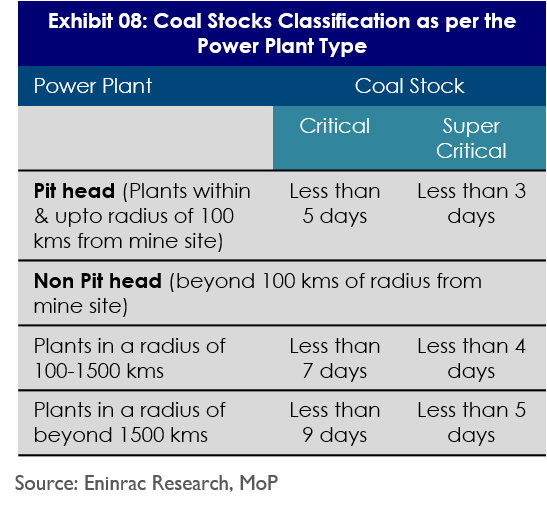 Due to the coal shortage witnessed in the country since July 2021, the electricity prices on power exchange has shot up. During Aug’2021 it rose to a level of to INR 20 per unit. However, in October’2021 it fall down to INR 7/unit. Having said that, if the coal shortage continued a surge in the power tariff will seen in the exchange market crossing a mark of as high as INR 22-25 per unit, which in turn will impact the industrial consumers.  Further, if the shortage continued, then this may increase per unit cost of coal supplied to the power sector and that will inflate the per unit cost of power generated, followed by rise in tariffs. The gencos here with long term of PPAs will struggle again in terms of recovering their total costs and will be under financial burdens. In case there is a increase in power tariff , pass on to the domestic consumers seems unlikely, commercial & industrial consumers will be exposed to the heat of increased tariffs, or if the inflated tariffs are absorbed by the DISCOMs, then that may result in further burdening them financially. Discontinued quality power supply (power cuts) can also be observed by the domestic consumers.

How can India resolve this problem ?

To resolve this issue of low coal inventories with the thermal power plants in India, some tough measures has to be taken by the government and the authorities.

Eninrac is a leading provider of market research, advisory and consulting services in the energy and infrastructure space to different stakeholders across the globe. Our team of experts blends extensive knowledge of all aspects of the energy and infrastructure industry to provide unmatched analytical insights, innovative strategies, and measurable value creation for our clients. We add value with pace, certainty and strategic agility and strive to exceed client expectations by delivering consistent results. We help our clients in unlocking potential and empowering organisations to achieve business objectives and goal effectively.

We at Eninrac put clients at the centre of our business and transform their risks into high rewarding opportunities through our innovative solutions.

To learn more about our service capabilities , visit https://eninrac.com/

Will smart metering be the vital vaccine for ailing Indian power distribution utilities?