Demand potential of hydrogen in India - End use industry competitiveness

India will almost double in market size for hydrogen by demand from 2020 levels by 2030. The chief contributors to this growth shall be the ammonia based fertilizers, petroleum refineries and chemicals industries

To maximize its environmental benefits, hydrogen must be “green”—made entirely from renewable-energy sources. Other methods, however, will also continue to be employed, some cleaner than others. Currently, the most common method, gray H2, involves using a fossil fuel to heat water into steam, mixing the steam with methane, and capturing the H2 released. Adding a filter to trap the GHGs emitted results in so-called “blue” hydrogen. Blue hydrogen is likely to remain economically favorable in places with an abundance of methane, especially once carbon capture technologies fully evolve.

Potentially by 2050, it is expected that around US$ 200 billion in annual capital pending shall be done which offers huge potential for machinery makers 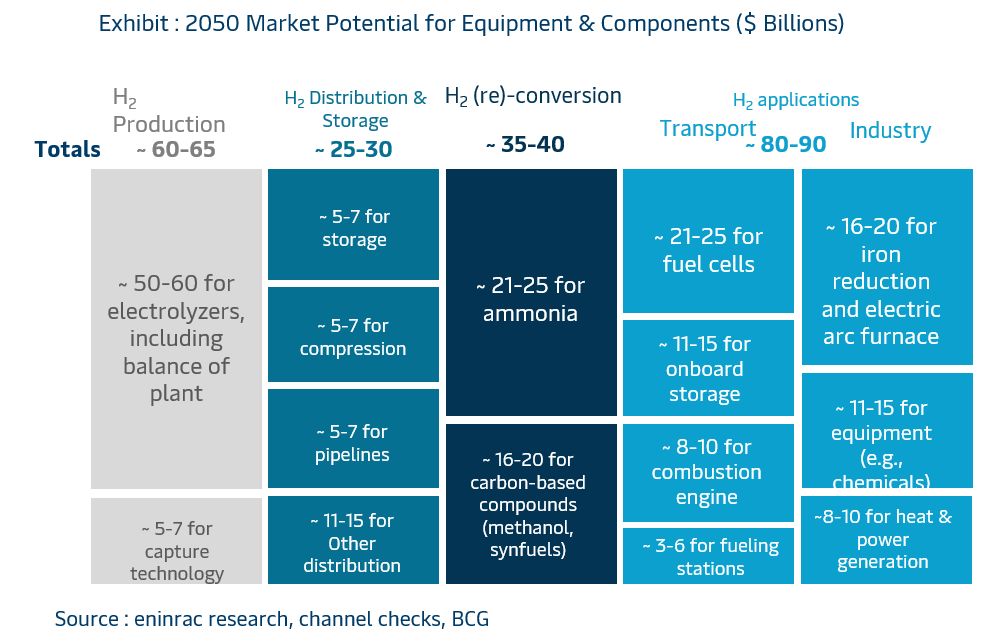 HOW MUCH HYDROGEN IS REQUIRED FOR TRAVEL, FUEL CELL & NATURAL GAS REPLACEMENT IN INDIA 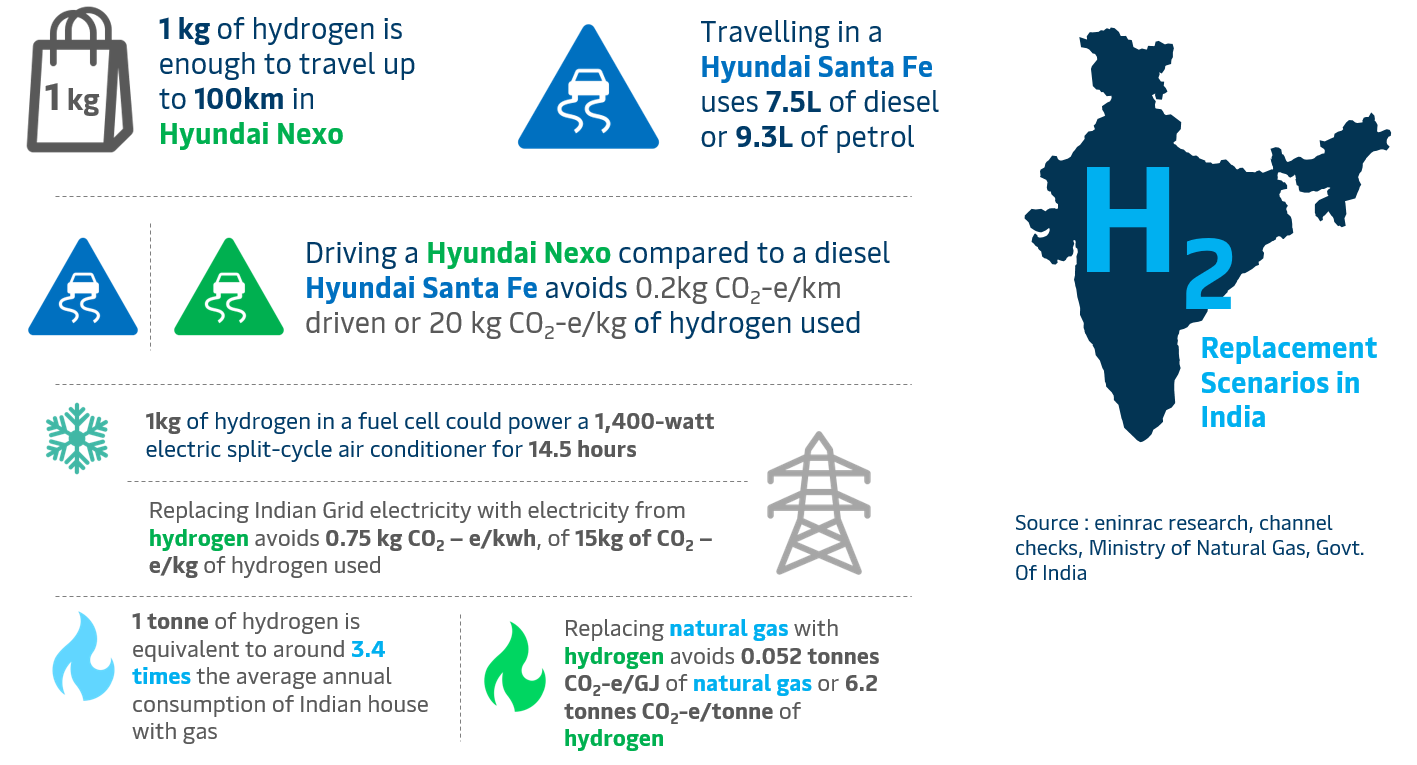 For a country like India, full benefits of hydrogen and fuel cell technologies play out when deployed at scale and across multiple applications

In the first two three years, the aim is to establish dependable and technology-neutral decarbonization goals in a greater number of states in the country and at the central level produce comprehensive guide which will serve input to regulatory & policy dynamics. 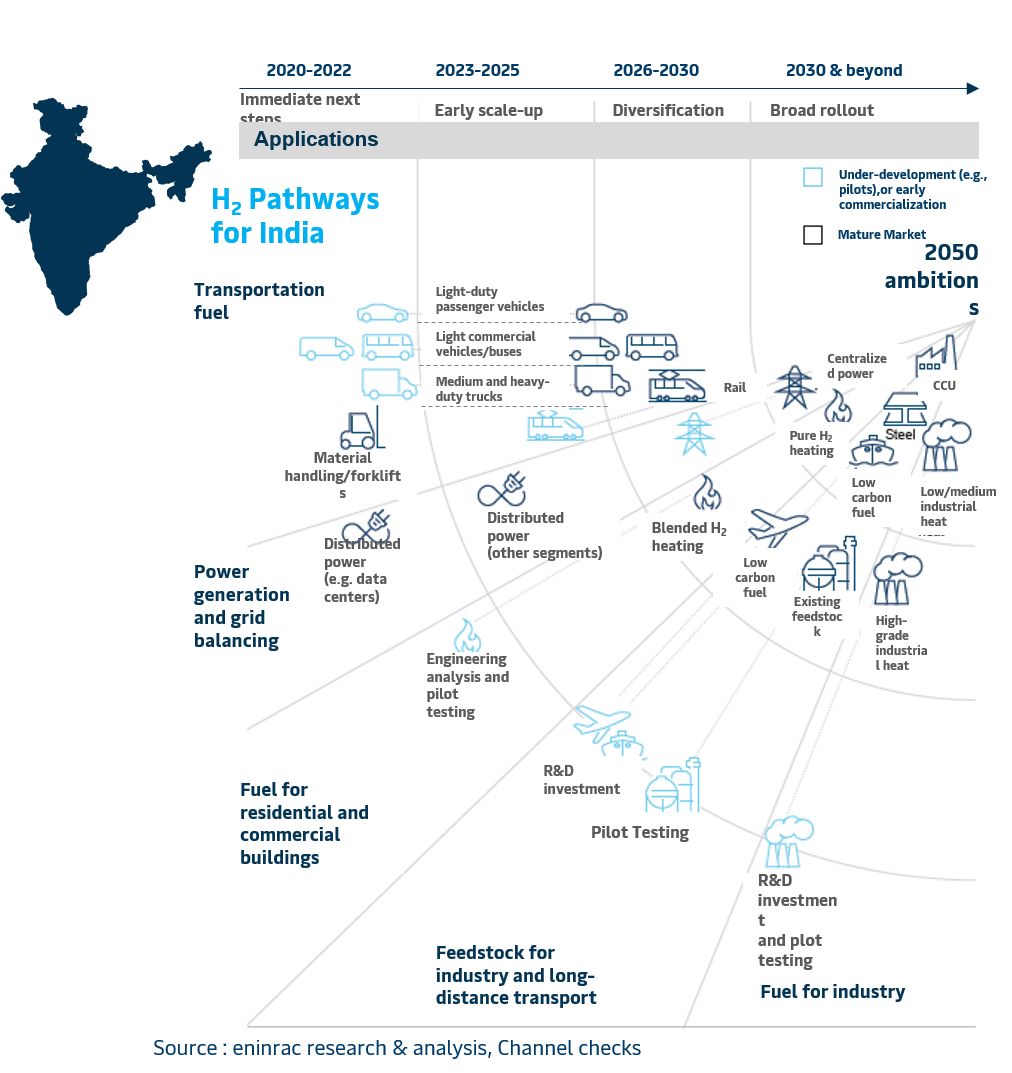 By 2025, large-scale hydrogen production in the country is anticipated to be developed. This shall be done by bringing the cost down and kicking off scale up applications. Policy incentives in early markets being transitioning from direct support to scalable based mechanisms.

The 2026 to 2030 phase is about diversification beyond early adopter segments and early adopter states such as transportation and backup power, and about scaling up infrastructure across the country. After 2030, hydrogen is deployed at scale in India, across regions and industries. Most applications achieve cost parity with fossil fuel alternatives through sufficient pricing of externalities, and public support for market introduction can be phased out

Infrastructure, availability of vehicles and at-scale equipment are key barriers, beyond unit economics and the cost gap 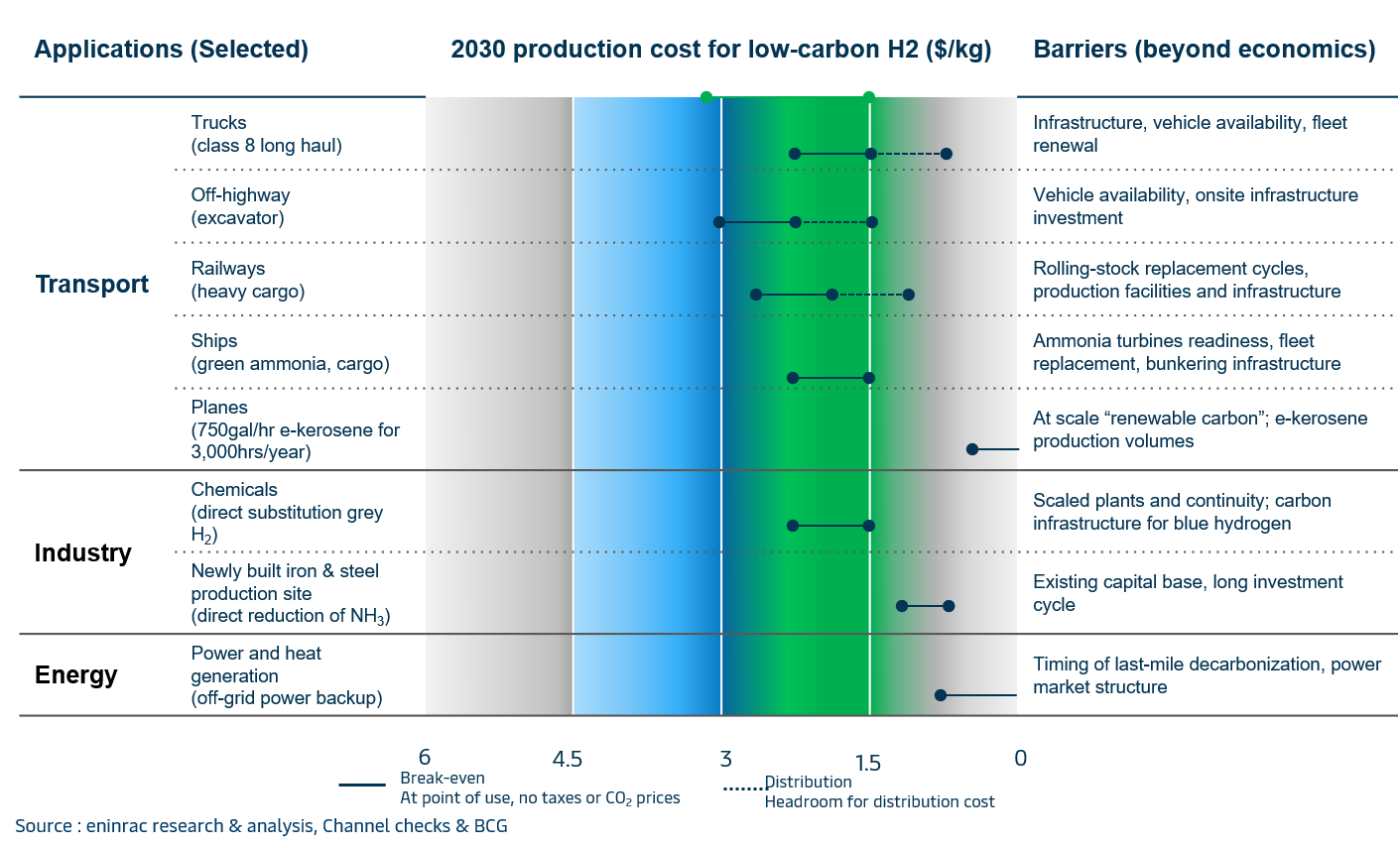 Australia, Japan, China & Republic of Korea in Asia Pacific region have already made commitments to use clean hydrogen and decarbonize their energy systems. Clean hydrogen is gaining grounds in Europe as well as in US and is having good hopes in India as well for registering growth. Globally, industries such as shipping, steel making, and chemical production see hydrogen as a long-term alternative to their dependence on fossil fuels. Interest has been bolstered by the falling costs to produce and use hydrogen. Over the past decade, for example, the cost of generating electricity from wind has fallen by about 70%, and from solar PV by about 80%. 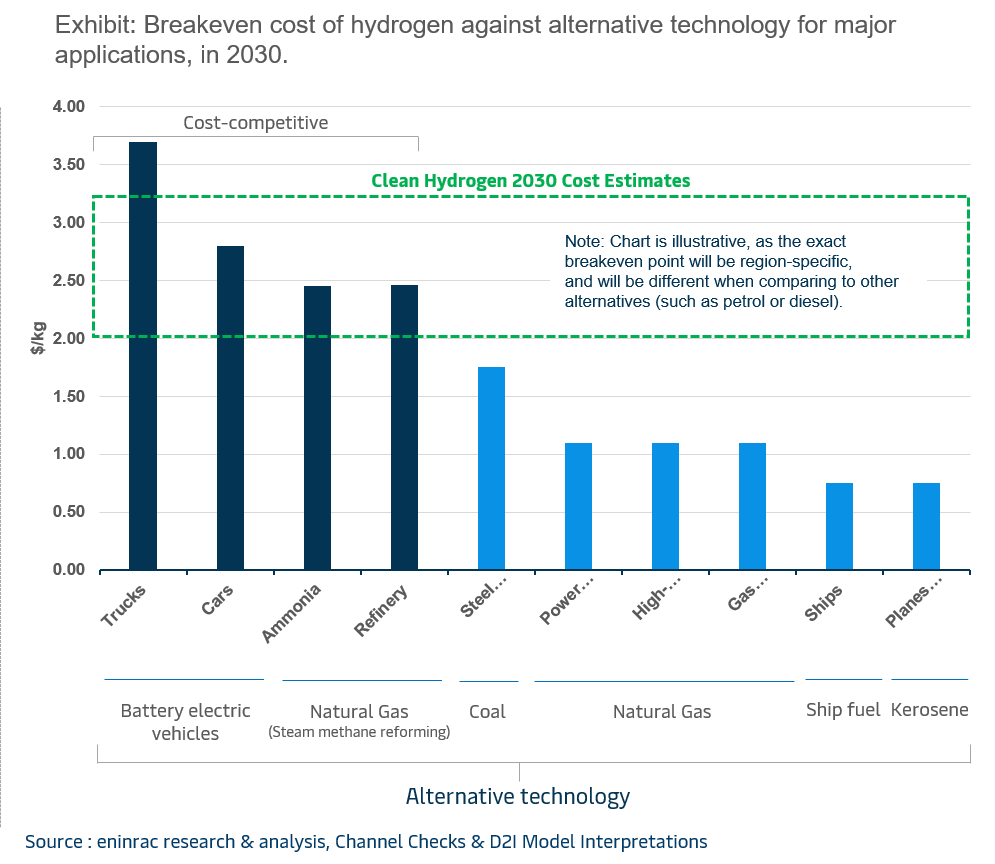 The cost to make a hydrogen fuel cell, meanwhile, has fallen by about 60% since 2006. With foreseeable technology improvements and higher manufacturing volume, it is anticipated that the cost of fuel cells might fall by about another 30% by 2025. The cost of storing hydrogen will also become cheaper with scale, technology and efficiency improvements – by up to 40% as ammonia and up to 80% as liquid hydrogen. As costs fall, clean hydrogen will become increasingly competitive. When and where this occurs will also depend on factors such as the cost of alternatives. 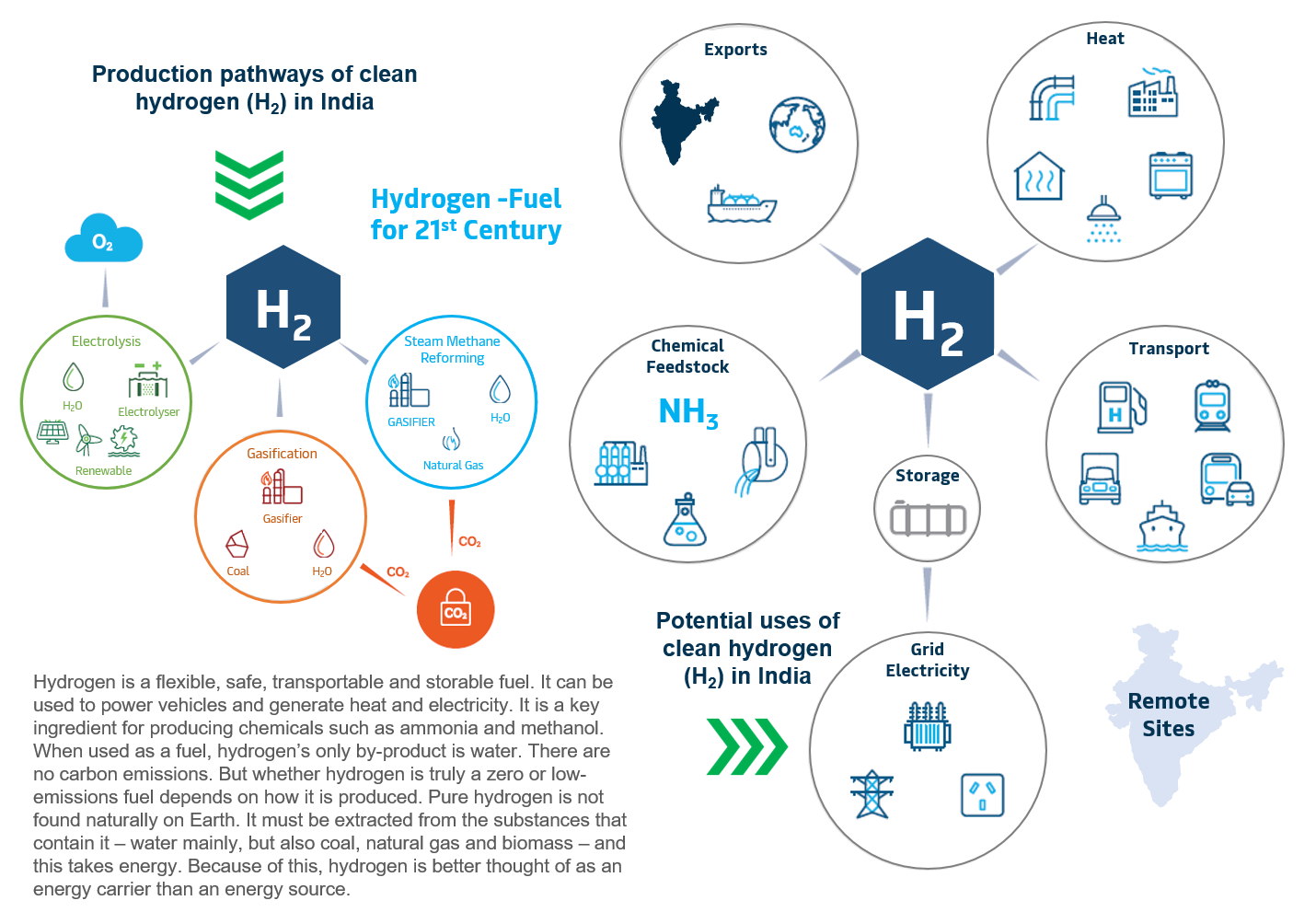 There is tremendous potential for low-cost, low-carbon production of H2 in India and the Government along with industry identifies the same.

There is tremendous potential for low-cost, low-carbon production of hydrogen in India, which can enable broad adoption of hydrogen across sectors. Currently in India, hydrogen mainly serve as feedstock in ammonia and methanol production and in refineries. In transportation it is catching up but is in very nascent stages in the country. It is anticipated that good numbers of FCEVs and buses shall come into play in the big cities for public transport in the country. Also, under the mining segment also it is anticipated to evolve as an alternative source. 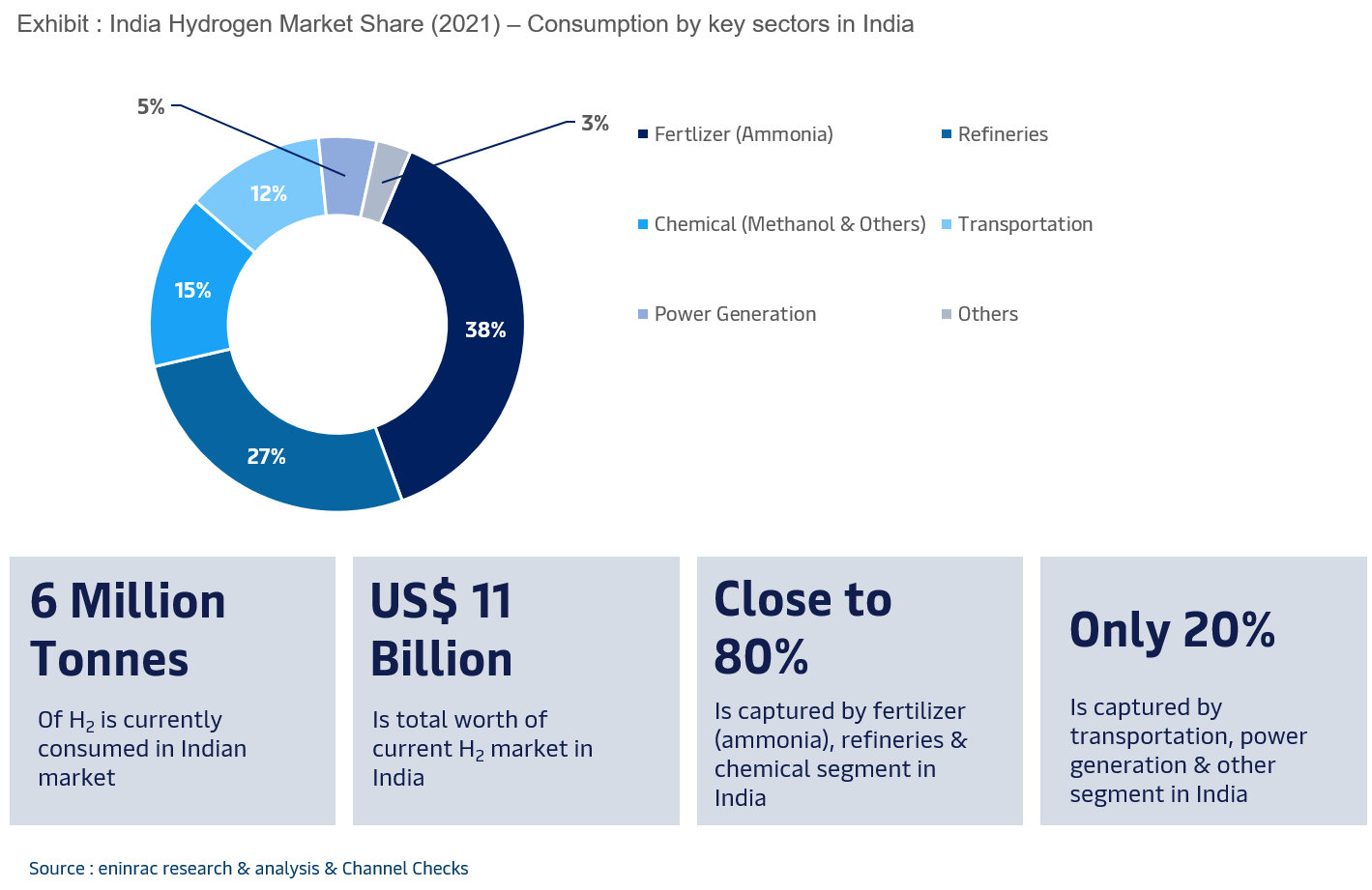 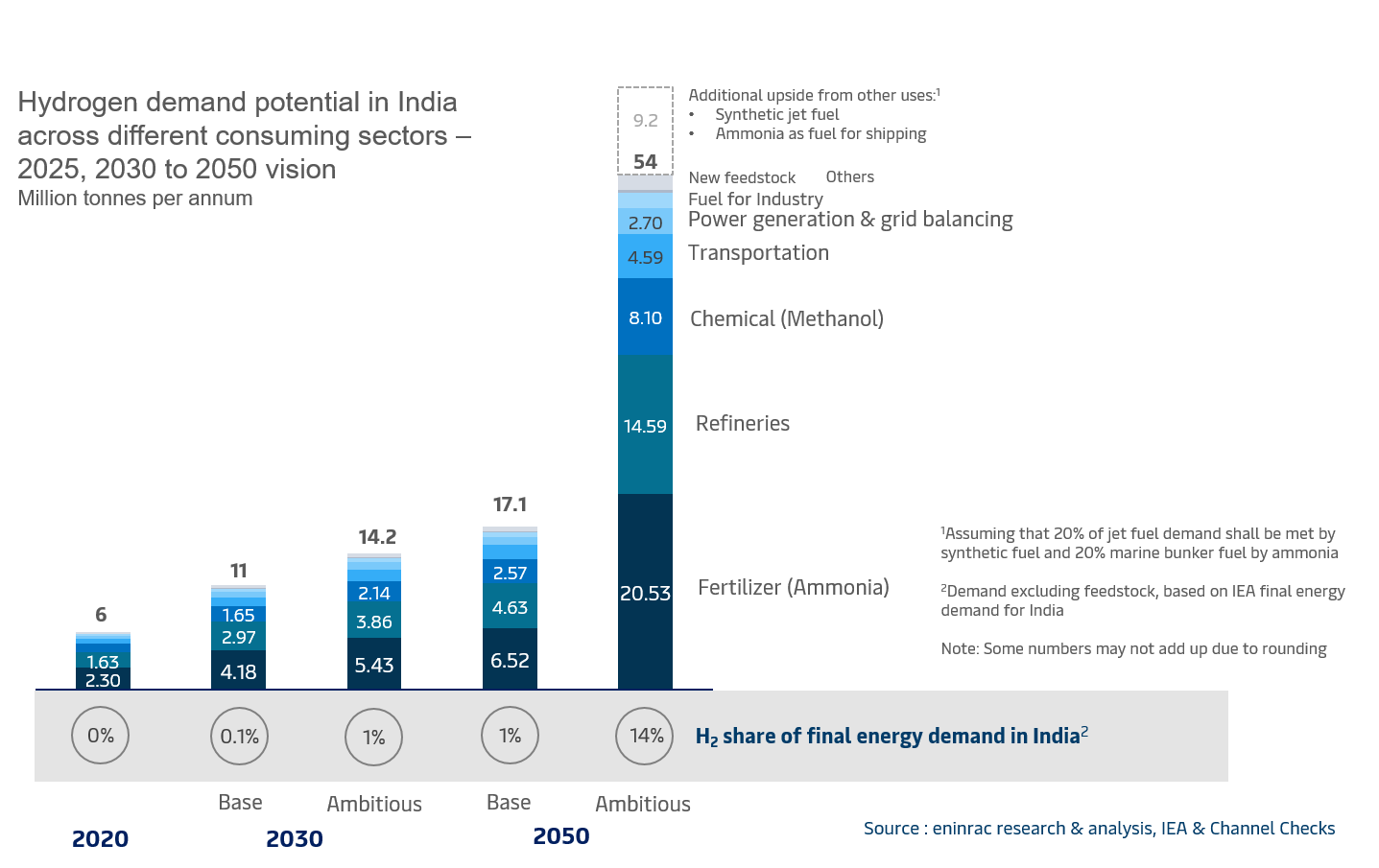 Hydrogen blending with natural gas in India – Use cases

Blending use cases with hydrogen in India
Companies can blend low percentages of hydrogen into existing natural gas networks without the need for major changes in infrastructure or new home appliances. The ability of utilities to blend hydrogen will be dependent on infrastructure and end-use characteristics, and each utility needs to assess its own pipeline systems on a case-by-case basis to determine actual acceptable levels of hydrogen blending without major changes or enhancements to existing pipeline infrastructure

Total hydrogen use in India in 2021 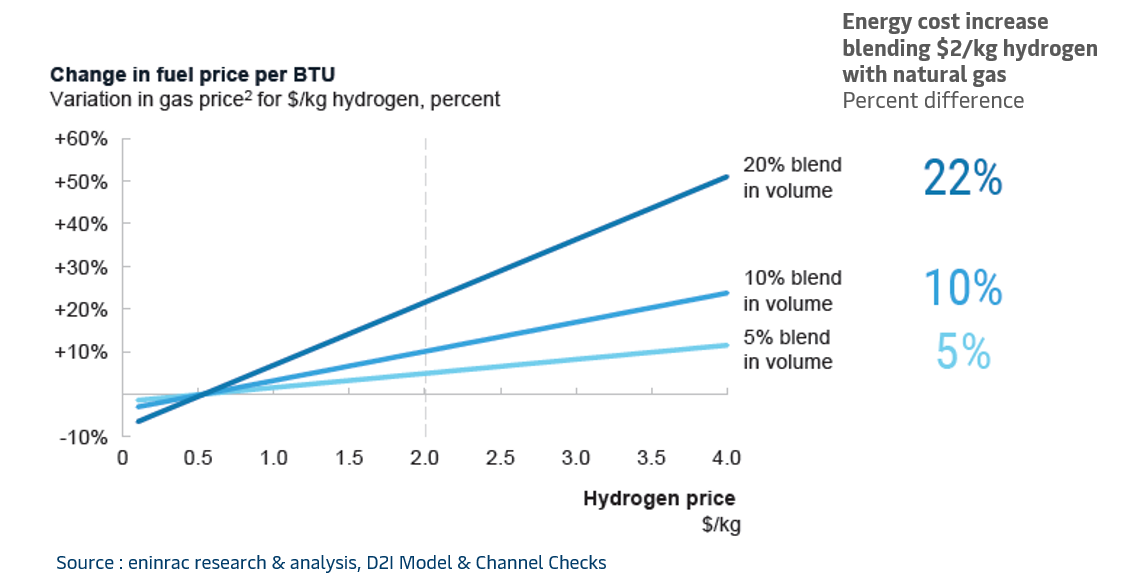 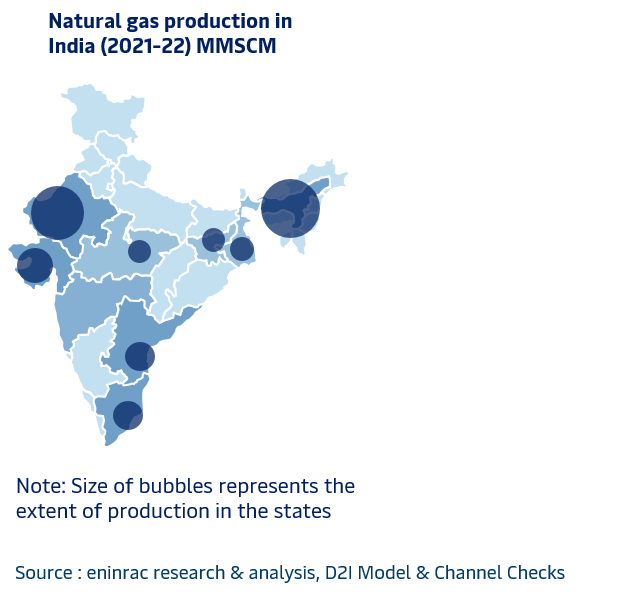 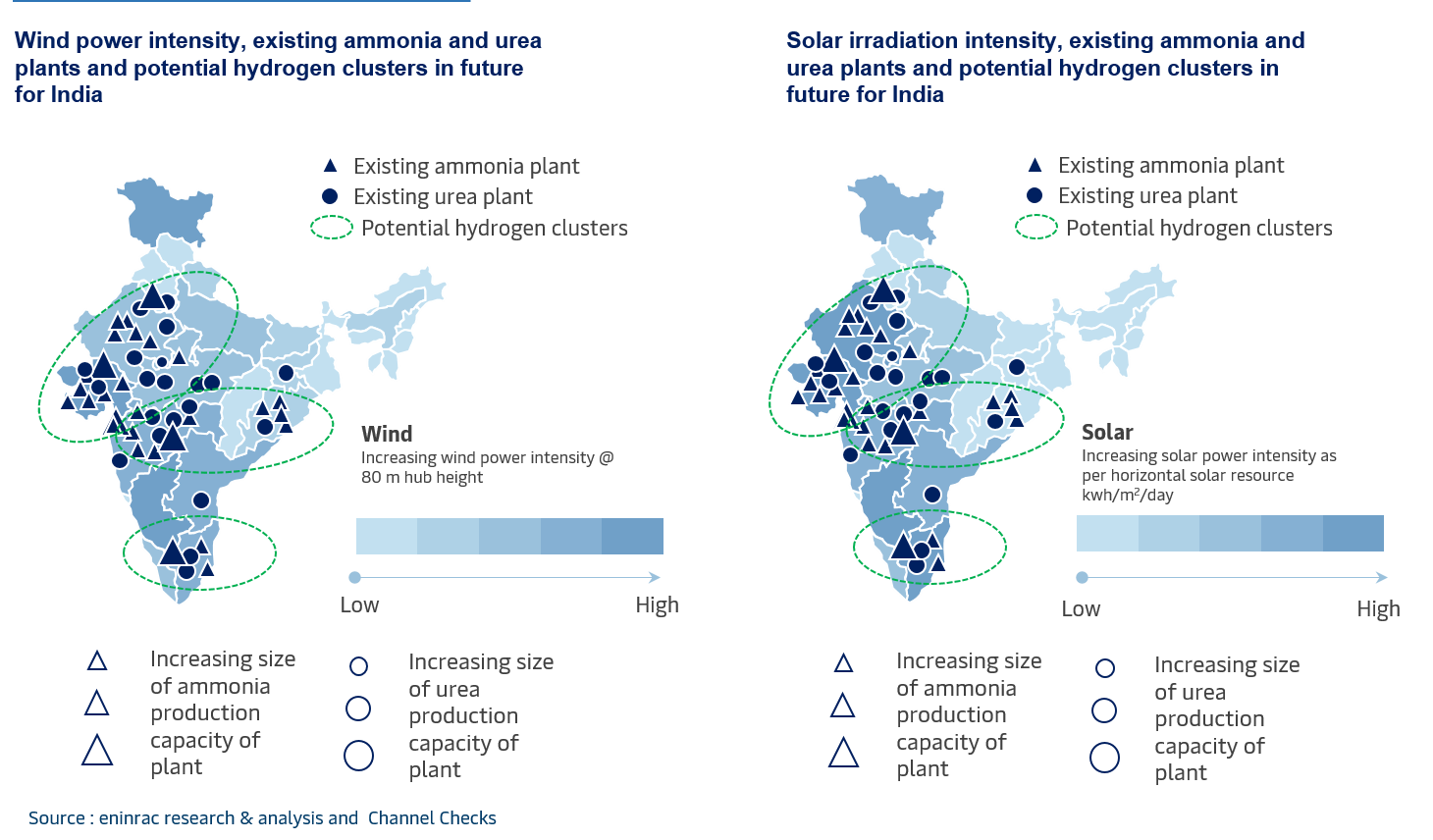