Underpinned by a global shift of regulators, investors and end consuming industries towards decarbonization , hydrogen (H2) is receiving unprecedented interests and investments. With the onset of calender year(CY) 2021 close to 30 nations have released their hydrogen strategy and roadmaps. More than 200 projects have been announced worldwide till March’2021 with a public funding of over USD 70 Billion. Although, the momentum exists along the entire value chain but its more skewed towards large scale industrial usage followed by transport and integrated H2 cross industry projects. It is pertinent to note that of total announced H2 projects in 2021, large scale industrial projects holds a lion share of close to 40%.

There exist about 228 hydrogen projects globally till March’2021 across the value chain, with nearly 56% projects are in Europe followed by Asia with 20% and 11% originating in Oceania covering Australia and New Zealand. If all the projects come to fruition, total investments will exceed USD 300 Billion by 2030, which equivalent to 1.5% of global energy funding. However, only USD 80 Billion of this investment can currently be considered mature which means that the investment is either in a planning stage, has passed a final investment decision or is associated with a project under construction already commissioned or operational.

This global shift towards decarbonization has only be seen due to strong financial & policy- regulatory backing from the respective governments worldwide. For example, the European Union has announced a 40-gigawatt (GW) electrolyzer capacity target for 2030.


Featuring over 750 projects the pipeline is testimony to the size and dynamism of the European hydrogen industry. More than 600 projects are planned to enter operation by 2025 across Europe.

In addition to the “top down” measures, specific projects need to create the new hydrogen market from the “bottom up” . Here , increasing focus is placed on the regionally integrated hydrogen ecosystems, so-called hydrogen hubs, hydrogen clusters or “ hydrogen valleys”. Over recent years, the Hydrogen Valley concept has emerged as a firmly established term in the European funding and collaboration landscape. Although Hydrogen Valley concepts are always adapted to cater to specific regional circumstances and the overall objectives of a project, there are common characteristics of what constitutes a Hydrogen Valley.

WHAT MAKES A HYDROGEN VALLEY ?


Large in scale - The project scope goes beyond mere demonstration activities and entails at least a two-digit multi-million EUR investment. It typically also includes several subprojects that make up the larger Valley "portfolio“.


Clearly defined geographic scope - Hydrogen Valleys are hydrogen ecosystems that cover a specific geography. Their footprint can range from a local or regional focus (e.g. a major port and its hinterland) to a specific national or international region (e.g. a transport corridor along a major European waterway).


Broad value chain coverage - Across their geographic scope, Hydrogen Valleys cover multiple steps in the hydrogen value chain, ranging from hydrogen production (and often even dedicated renewables production) to the subsequent storage of hydrogen and distribution to off-takers via various modes of transport.


Supply to various end sectors - Hydrogen valleys usually showcase the versatility of hydrogen by supplying ideally several sectors in their geography such as mobility, industry and end uses. 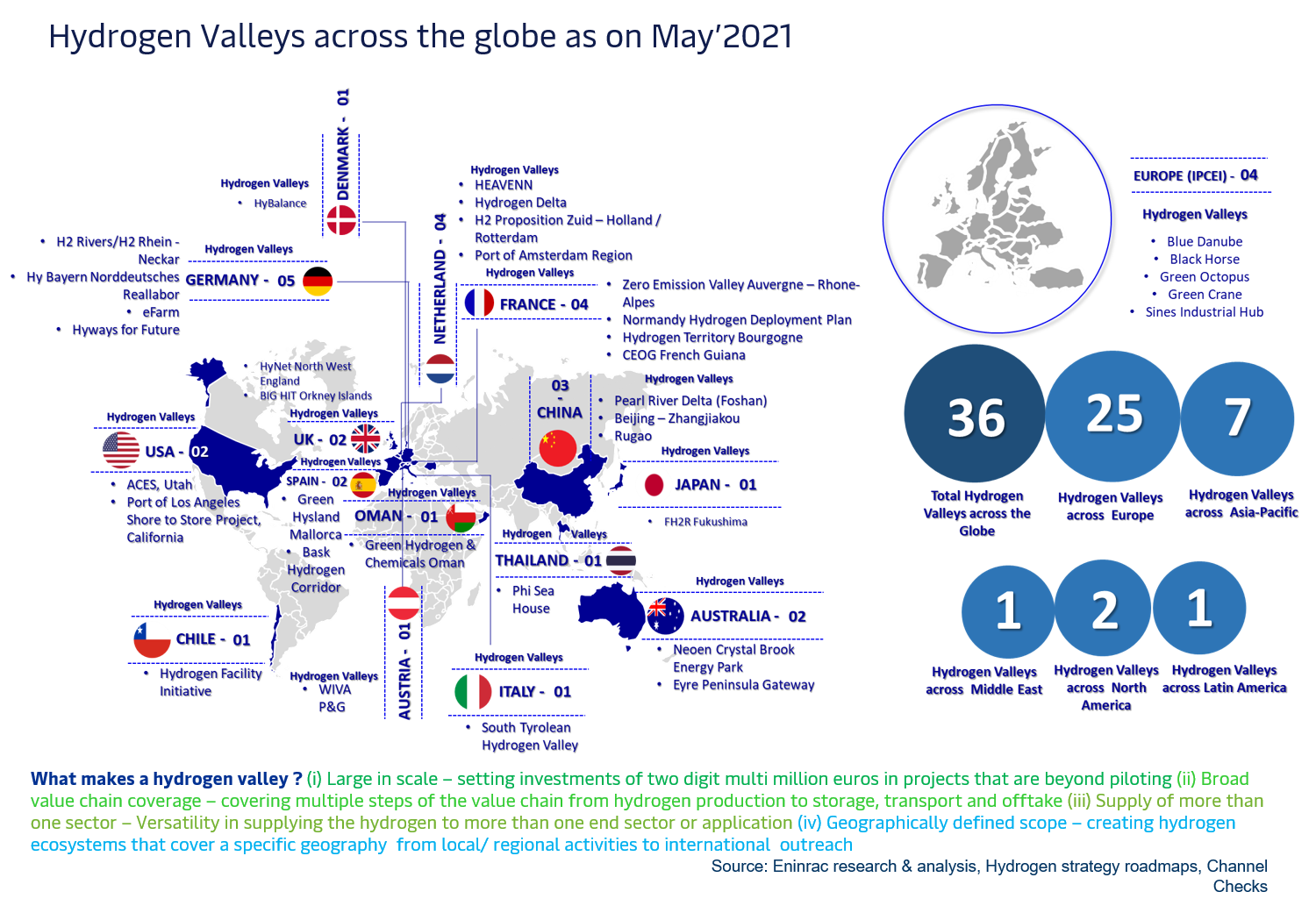 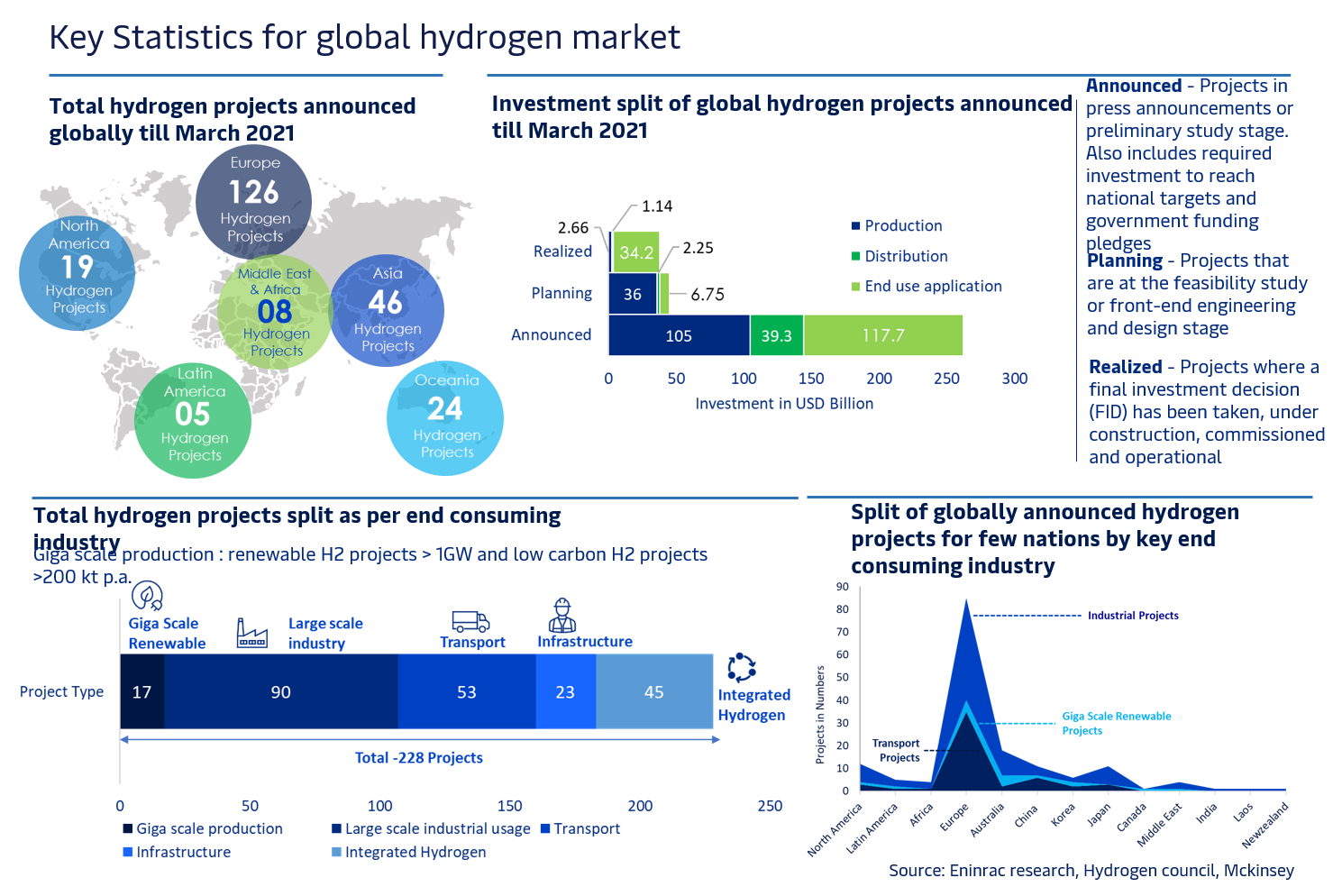 Since 2017 till date , hydrogen industry stakeholders have announced more than 30 major investments globally

Hydrogen development across the globe is accelerating. Building on this momentum , governments have implemented a growing number of tangible policies promoting hydrogen. Since 2017 till first half of year 2021 nearly 18 governments (this is increasing), whose economies account for 70 per cent of global GDP, have developed detailed strategies for deploying hydrogen energy solutions. This includes recent announcements from the coalition of governments forming the Energy Ministerial to target the global deployment of 10 million fuel cell electric vehicles (FCEVs) by 2030 – a fourfold increase of the target over the last two years – and projects across China, Japan, the US, and South Korea to build 10,000 hydrogen refuelling stations by 2030.

More industry players are recognising hydrogen’s versatility and falling cost, enabling investments in a growing range of sectors. One such global initiative, the Hydrogen Council, has seen its membership grow to 60 companies (till 2021). This is up from 13 at its founding in 2017, representing a combined market cap of USD 1.7 trillion with combined revenues of over USD 2.6 trillion and close to 4.2 million jobs around the world.

Over the same period, stakeholders have proposed more than 30 major investments globally in segments such as heavy-duty trucking, rail, and steel production from low-carbon or renewable hydrogen. 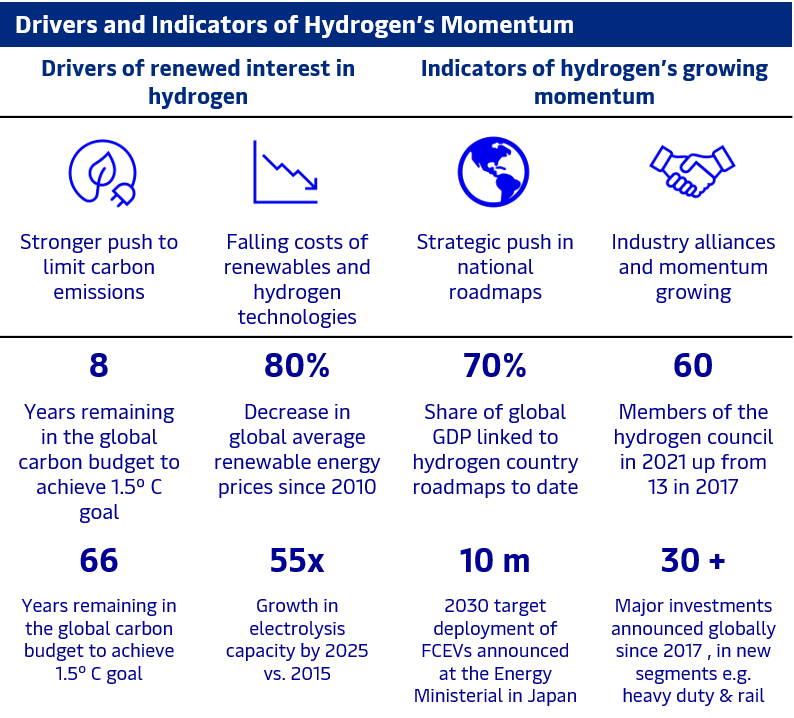 Three factors are driving this acceleration. First, capex requirements are dropping. We expect a significant electrolyzer capex decline by 2030 – to about USD 200-250/kW at the system-level (including electrolyzer stack, voltage supply and rectifier, drying/purification and compression to 30 bar). That is 30-50% lower than we anticipated last year, due to accelerated cost roadmaps and a faster scale-up of electrolyzer supply chains. For example, several electrolyzer manufacturers have announced near-term capacity scale-ups for a combined total of over approximately 3 GW per year.

Second, the levelized cost of energy (LCOE) is declining. Ongoing reductions in renewables cost to levels as much as 15% lower than previously expected result from the deployment of at-scale

renewables, especially in regions with high solar irradiation (where renewables auctions continue to break record lows). The strongest reductions are expected in locations with optimal resources, including Spain, Chile, and the Middle East.

Including carbon costs emissions related to gray and low-carbon hydrogen production greatly influences the breakeven dynamics between gray and renewable hydrogen. Assuming a carbon cost of about USD 50 per ton of CO2e by 2030, USD 150 per ton CO2e by 2040, and USD 300 per ton CO2e by 2050, can bring the earliest breakeven for renewable hydrogen forward to a 2028 to 2034 timeframe. The exact year will depend on the availability of local resources.

In countries with optimal renewables but average cost natural gas (e.g., Chile) breakeven could occur as soon as 2028. In locations with average resources for both pathways (e.g., Germany), breakeven could come by 2032.

At the same time, locations with abundant and optimal resources for both pathways (e.g., selected regions in the US) could see the breakeven of gray and renewable hydrogen by 2034. Low-carbon hydrogen could be seen having breakeven with gray by 2025-2030, subject to at-scale CO2 storage and transport infrastructure, and an expected cost of about USD 35-50 per ton CO2e

Electrolyzer system costs could drop from about USD 1,028/kW in 2020 to an estimated USD 340/ kW in 2050 (in the base case scenario according to Eninrac Electrolyzer cost model). This calculation includes the stack as well as the balance of plant (e.g., transformer and rectifier, drying/purification to 99.9% purity, compression to 30 bar). It excludes transportation of the electrolyzer to the site, installation, and assembly (including grid connection), the cost of the building (for indoor installations), and indirect costs such as project development, field services and “first fills.” 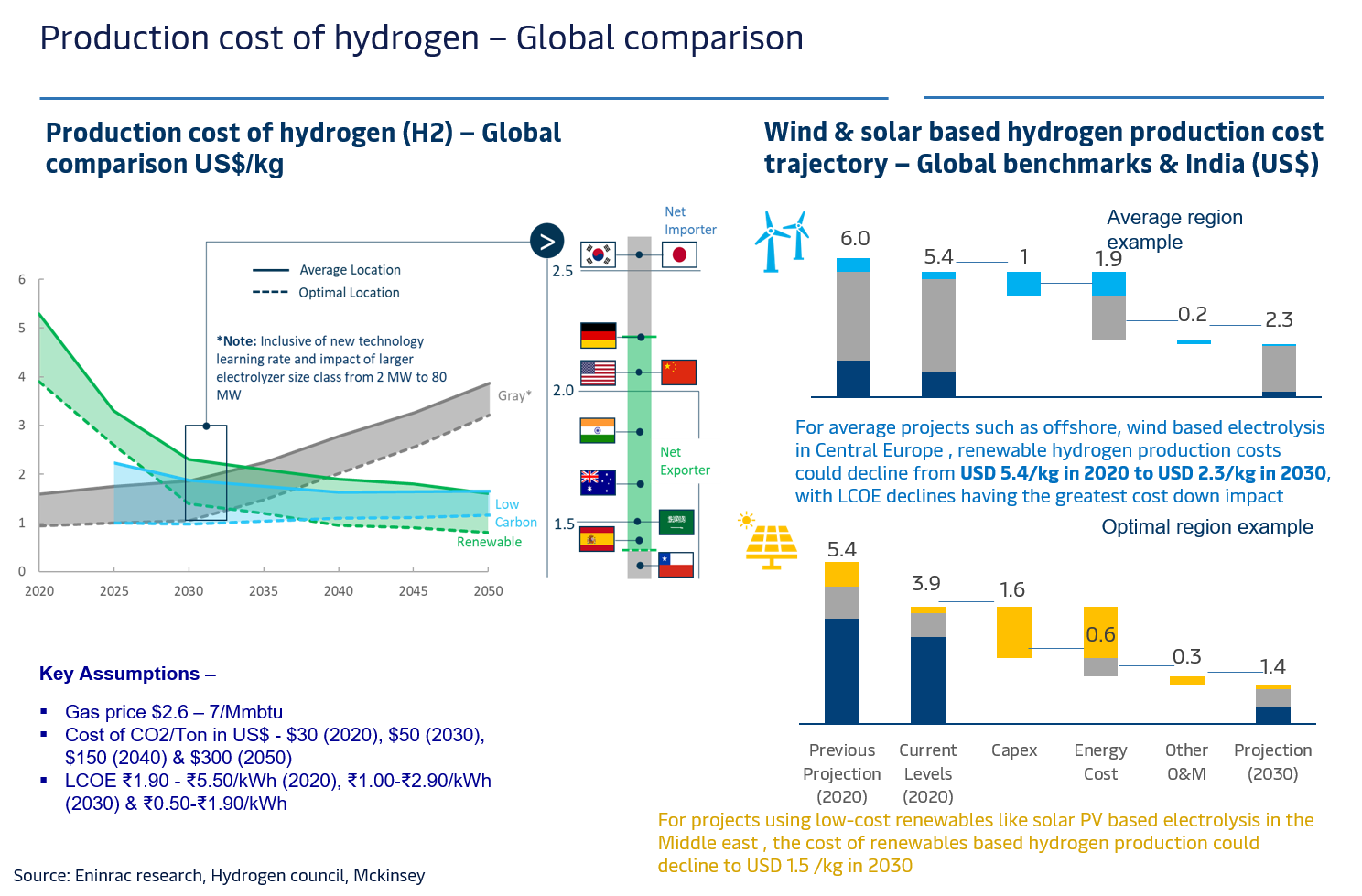 With hydrogen production costs falling, costs for hydrogen distribution are becoming increasingly more important. For production and distribution, three types of value chains are emerging. Largescale hydrogen off takers that are in close proximity to favourable renewables or gas and carbon storage sites will use onsite production. Smaller off takers, for example re fuelling stations or households, will require regional distribution. In regions without optimal resources, both large- and small off takers may rely on hydrogen imports.

Current learning curve expectations for electrolyzer scale-ups range from 11-12% between 2020 and 2030 for polymer electrolyte membrane (PEM) and alkaline technologies. However, these learning curves appear conservative compared with the early development of other low-carbon technologies like batteries, solar PV or onshore wind, which saw learning rates of approximately 20-40% between 2010 and 2020. Potentially higher learning rates of 15%, 20% or 25% would drive additional cost reductions of 10-20%, 40-50% or 60-70%, respectively, by 2030 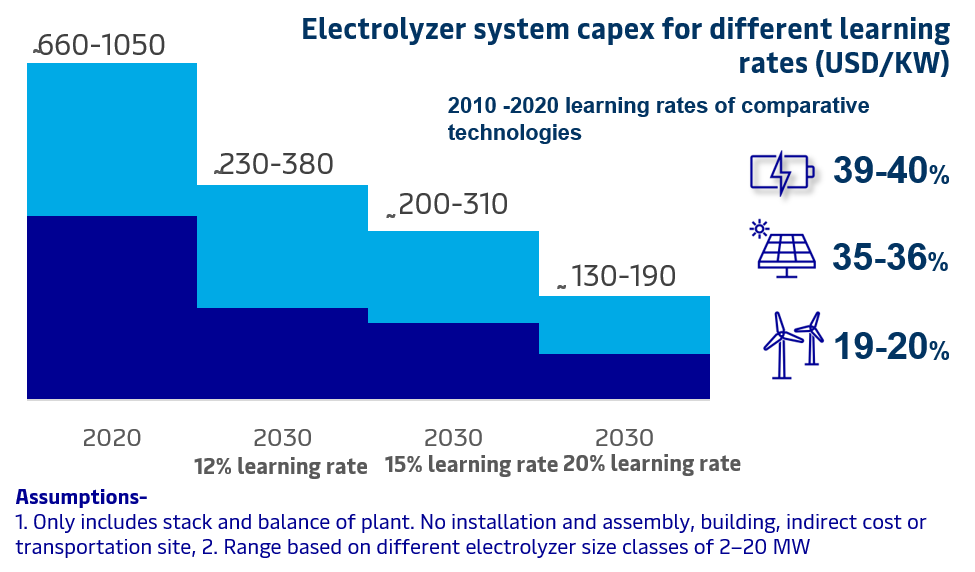 The emergence of international distribution is driven by cost differences for hydrogen production stemming from renewables endowment, the availability of natural gas and carbon storage sites, existing infrastructure and the ease and time requirements for its build-out, land use constraints, and the assignment of local renewables capacity for direct electrification. Many expected hydrogen demand centers, including Europe, Korea, Japan, and parts of China, experience such constraints. In some of these cases, H2 suppliers will meet this demand more effectively by importing hydrogen rather than producing it locally.

Because electrolyzer system capex should decline sharply, other cost elements (including installation, assembly, and indirect costs) will take a larger share of costs over time. That’s because learning curve effects regarding the engineering, procurement and construction (EPC) part of the value chain will be limited after the deployment of the first few large-scale projects.

EXPECTED ELECTROLYSER CURVES COULD BE TOO CONSERVATIVE 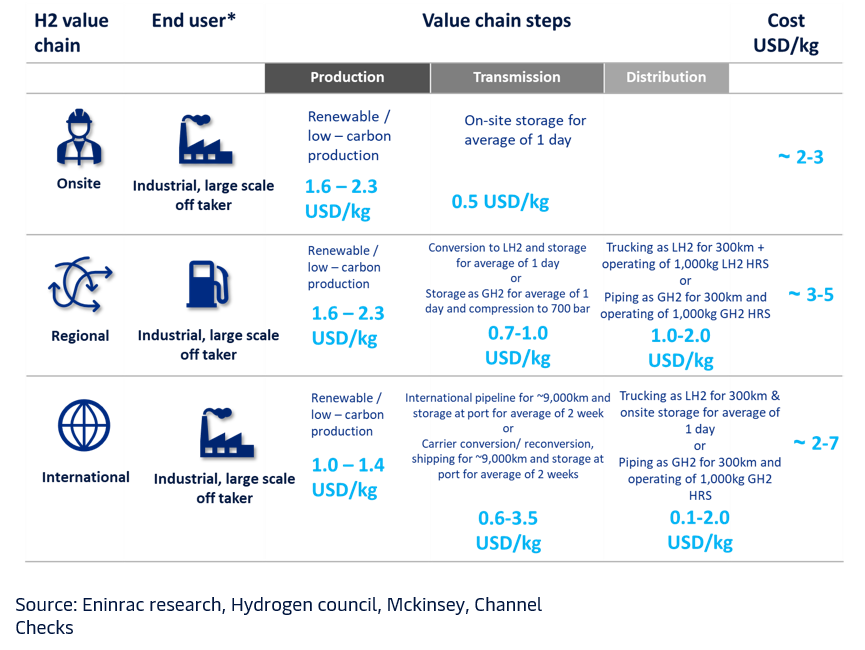 The total cost of an electrolyzer project also includes financing costs. A contribution margin in line with the project’s weighted average cost of capital (WACC) requirements should scale with other capex elements. Financing thus becomes an important way to reduce hydrogen production costs. For instance, reducing WACC from 7% to 5% would reduce a project’s overall capex commitment by almost 20% 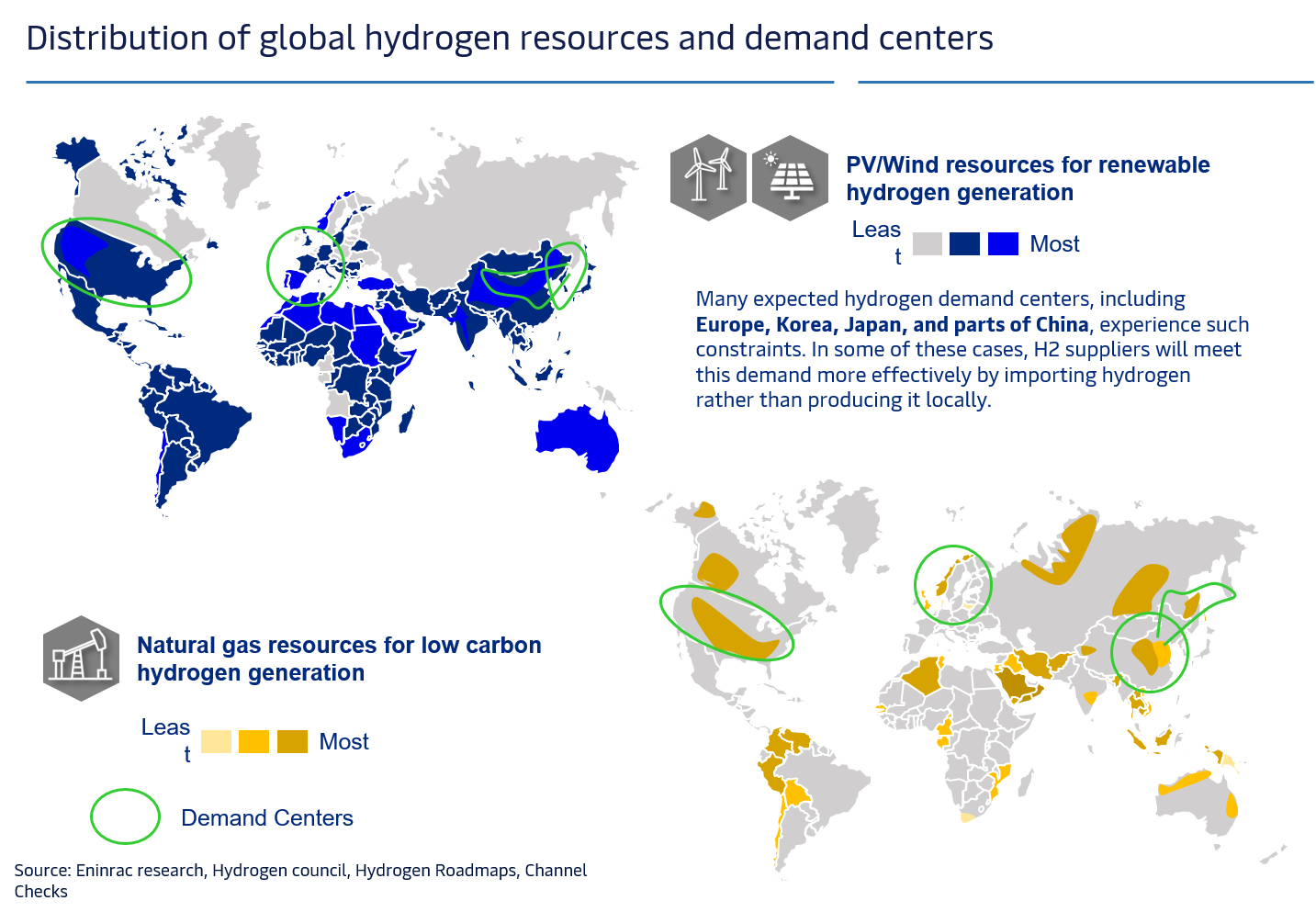 Why green H2 is pegged as a game changer in India ?

India has been no different when it comes to investments for H2 from the world in terms of sentiments to say the least. With companies like Reliance, Adani, IOCL and NTPC all geared up with ambitious green H2 plans, India certainly looks poised for a carbon free transition. Also, with National Hydrogen Mission the country aims to become the largest exporter and producer of green H2. Strategic collaborations, massive technological investments and ideal policy & regulatory interface for Indian firms is shaping the green H2 market in the country to acquire a fast pace by 2025. This shall be inline with projections that by 2050, 3/4th of all the hydrogen produced shall be green produced by renewable energy and electrolysis. 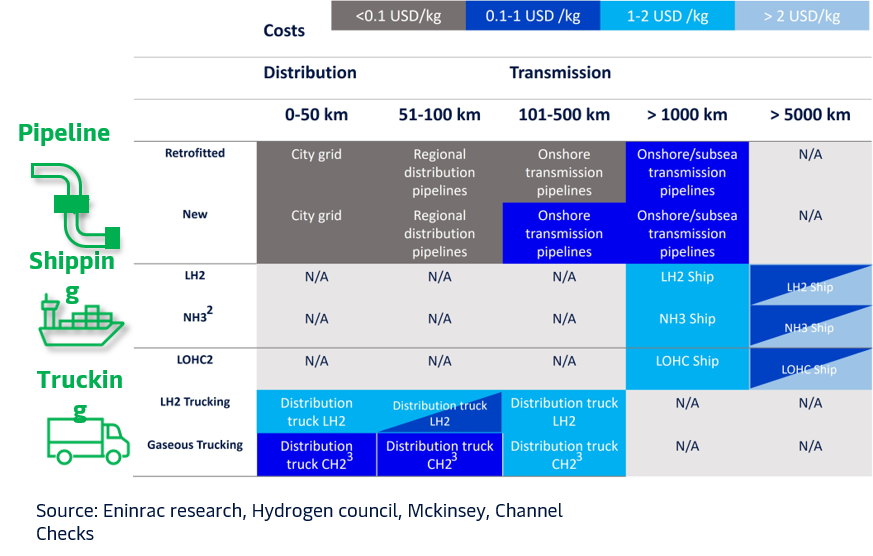 For India, the scene shall be dominated by low-cost renewable projects like solar PV electrolysis or wind-based electrolysis could see the green hydrogen cost as low as $1.5/kg to $2.3/kg which shall increase the competitiveness by 2030, respectively. Thus, India shall be the destination next for global investments for green hydrogen projects.

The H2 supplies depends upon the optimal H2 transport mode, that varies by distance , terrain and end-use : no universal solution exist

Hydrogen can be transported globally using three forms of transportation – trucks, pipelines or ships – using a range of different carriers. Currently, liquid hydrogen, liquid organic hydrogen carriers and ammonia are the carbon-neutral solutions with the most traction. While the optimal choice of transportation depends heavily on the targeted end-use and the terrain to be covered, some general rules on preferable solutions for different distances apply.

For longer distances, both new and retrofitted subsea transmission pipelines provide cheaper at scale transportation than shipping, but are not relevant for all regions. Where pipelines are not available, the transportation choice involves a range of different carriers. The three modelled here – LH2, LOHC and NH3 – are the most discussed 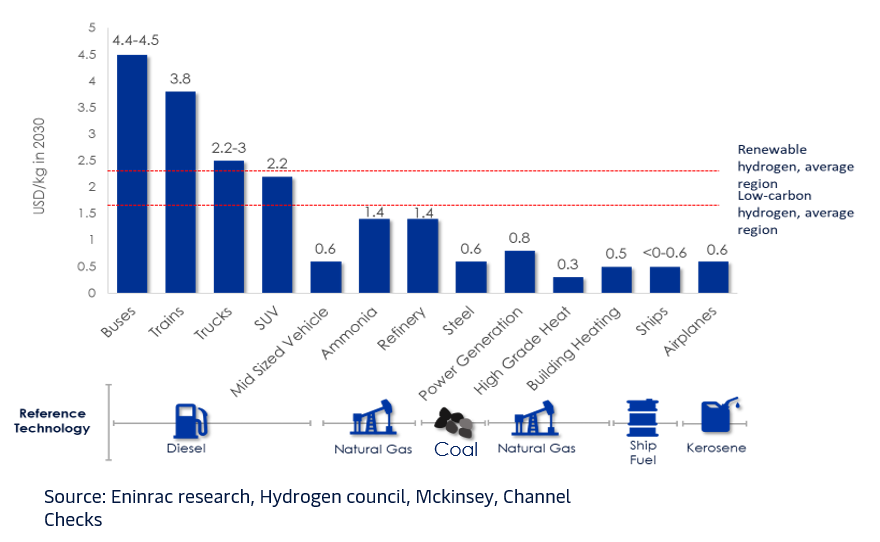 For short and medium range distances, retrofitted pipelines can achieve very low H2 transportation costs (less than or equal to USD 0.1/kg for up to 500km). However, these costs are realizable only if existing pipeline networks are available and suitable for retrofitting (e.g., ensuring leakage prevention), and high volumes of H2 are transported, guaranteeing high utilization rates. For lower or highly fluctuating demand, or to bridge the development to a full pipeline network roll-out, trucking hydrogen – in gaseous or liquid form – is the most attractive option. It can achieve costs of around USD 1.2/kg per 300km. End applications as well as demand size are decisive for choosing between liquid or gaseous hydrogen trucking options. 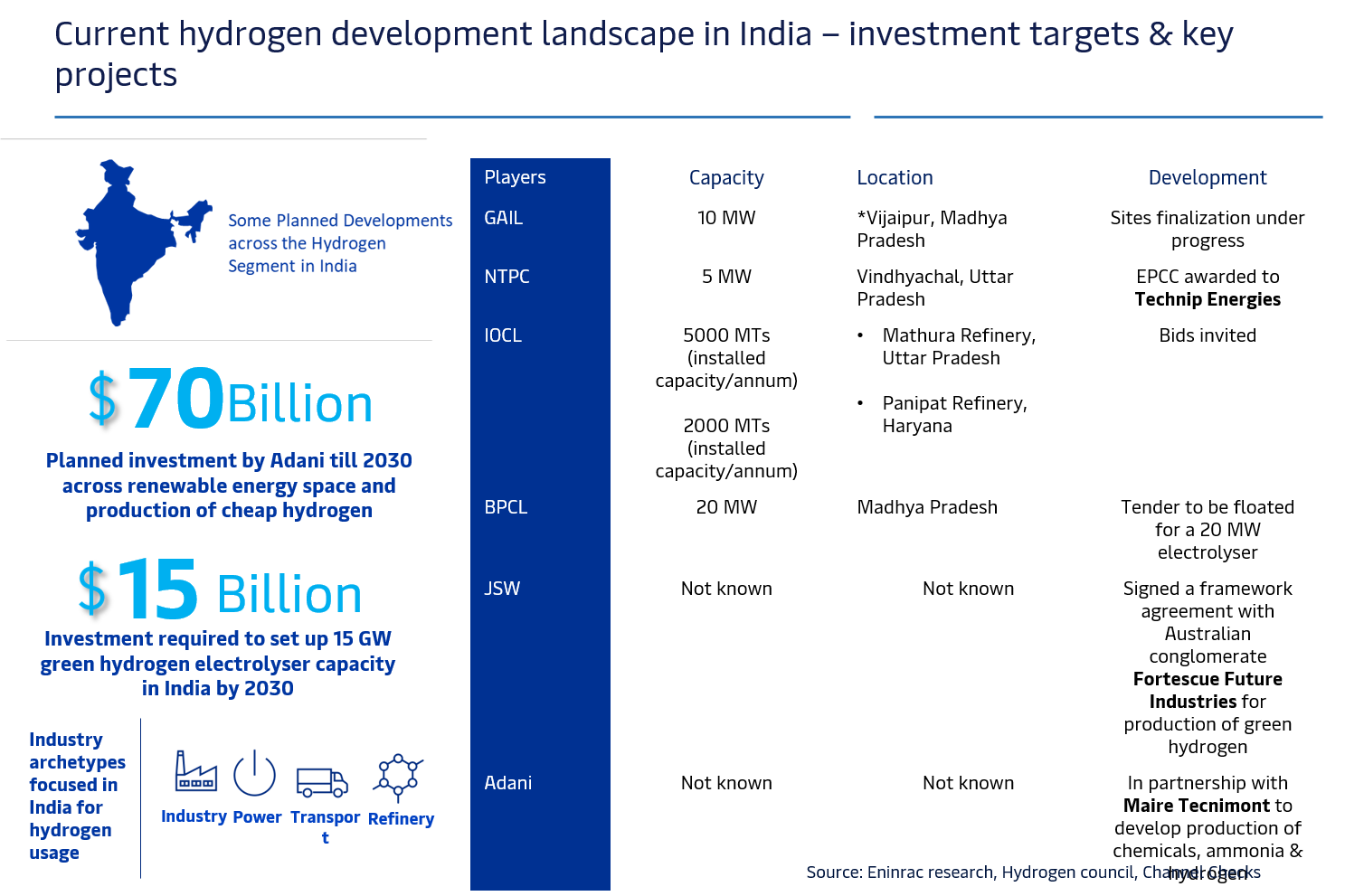