Is India cognizant enough of non-performing assets (NPAs) wave building for Renewable Energy (RE) Projects? Why the attribute of “prevention better than cure” not followed despite thermal power assets reeling NPAs?

ON – POINT QUERY: Indian renewable sector has cornered the bulk of private funding especially over the last decade from FY10. With heavy dues piled up by discoms for RE generators, what’s the way forward for the country?

The Indian power sector accounts for almost half the credit to the infrastructure sector and is a top drawer from the banks and lending institutions. Further, in the power sector, the renewable sector itself witnessed a massive spurt in FDI volume and has seen an inflow of $ 3.22 Billion in a span of four years from FY17 to FY21. Having said so, such tune of investments already being done and with envisaged aggressive targets of capacity additions being set by GoI calls for a further escalation in the tune. But given the struggles in the recent past by the RE power generation companies in getting a seamless cash flow from the power distribution utilities is a grave challenge that pose a threat of India sitting on a wave of RE NPAs as well. The situation is indeed grim and as a country wherein our banking system is fragile and creating a massive set of NPAs from RE sector may prove to be the death knell for it.

Moreover, the lending sentiments from the banks have renewed nervousness as the investments in the Indian renewables sector post-2014 could turn bad. There are two prime reasons which can be attributed to the degree of rising nervousness of the lending bodies towards renewable sector the country with the first one being the falling tariff trends observed in both solar and wind auctions, leading the industry pundit’s mull that a solar plant can run to be a NPA if the agreed LT-PPA tariff is at sub ₹2.70/unit levels. This for sure is arguable, but still considering a benchmark which most of the utilities shall be eager on signing the future PPAs of solar plants in the country this might lead to very thin operational margins which can be imperious for the developers banking upon LT-PPAs and not on OA mechanism. Secondly, the payment cycle for the renewable energy developers (given a potential of renegotiation possibility from discoms for already signed PPAs) which has started to see massive delays ranging from an excess of 60 days to 1400 days for most of the discoms of RE rich states. These are the alarming signals for the sector which the entire industry needs to pay heed in order to control the extent of possible NPA behemoth we could be staring and suddenly shall be insurmountable as well.

To understand better as to why the industry should be more than cognizant towards the headwinds which signal all red for already struggling power sector of the country, we shall focus on crucial facts as enlisted below:

Although, renegotiation of PPAs has been a point of concern but has not light beyond Andhra Pradesh and arguably seems unlikely as GoI is committed to ensure righteous realization to the developers. The bigger threat comes from the extent of dues and the degree of delays observed which can severely dent the credit ratings of the RE developers and put pressures in servicing the debt eventually stashing the NPAs. Let us understand the current status of dues owned by respective discoms of 8 major RE capacity states. The states considered for analysis are Tamil Nadu, Andhra Pradesh, Gujarat, Karnataka, Maharashtra, Madhya Pradesh, Rajasthan & Telangana. The total dues of the developers cumulative for these state’s stand at a whopping ~ ₹ 13,000 Crores most of which are being due for over 60 days and extend closer to 1400 days in terms of overdue period. This degree of delay is insane looking onto the liquidity perspective of the projects. One key escape for the RE project developers to evade this situation then becomes to focus on the “Open Access” route and get capitalized through sovereign off-takers. Either way, whether the discoms focus on lowering the tariffs for future bidding of RE projects or the developers opting for sovereign off-takers shall not be ideal for the Indian power sector. Tamil Nadu, Andhra Pradesh and Telangana discoms on a combined basis owe 72% of the overall debt, which impacts the generation portfolio of almost all developers in the country factoring both solar as well as wind capacities. It is absolutely imperative now to focus upon this issue so that it can be addressed at the front with India not looking to stash bad assets in RE capacities as well which shall hinder the future RE capacity plans for the country which already is progressing sluggishly with COVID 19 further hampering the growth rate.

Would you like to learn more about the Feasibility & Indexation of DISCOMs Viable for Privatisation? 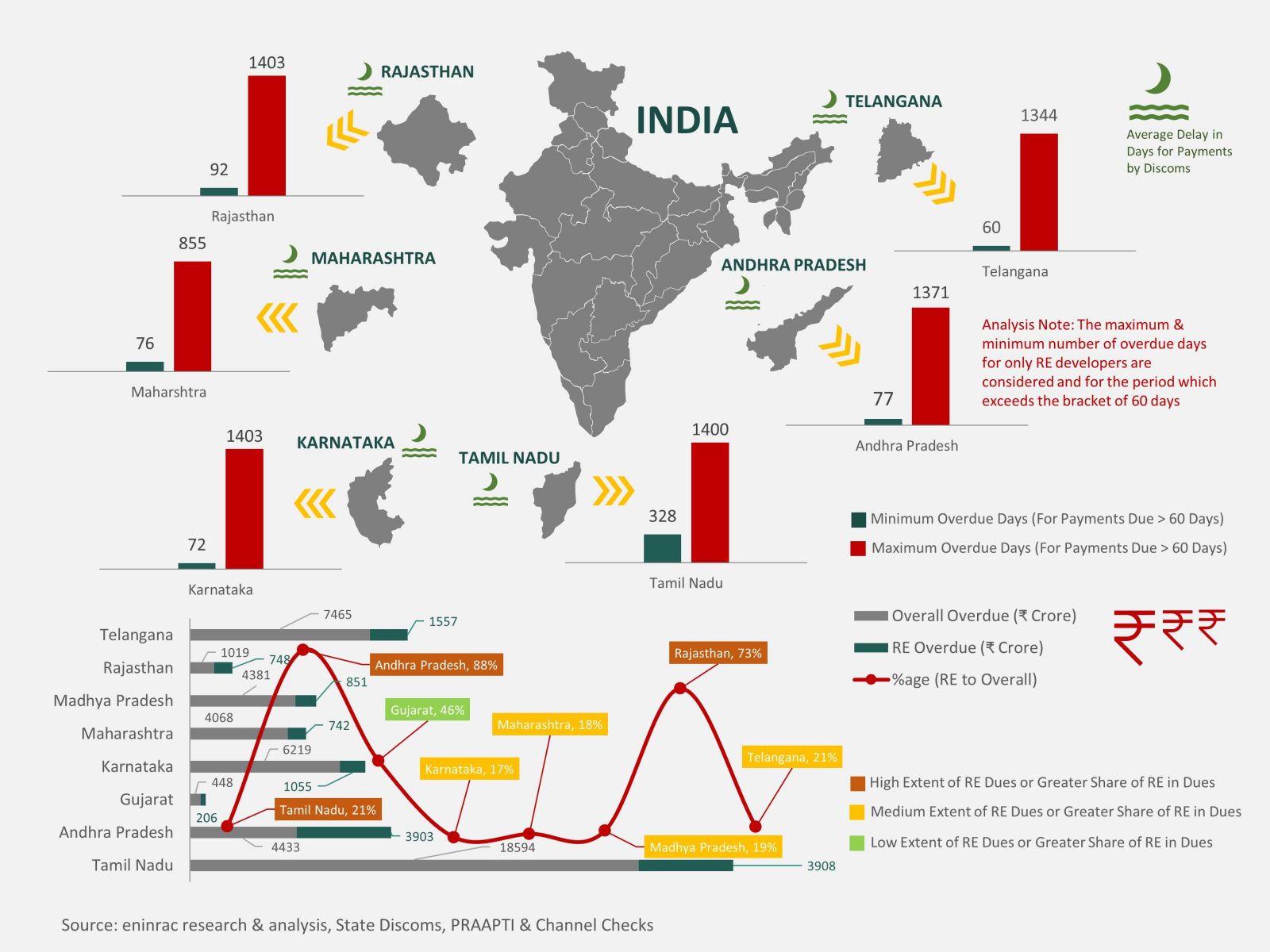 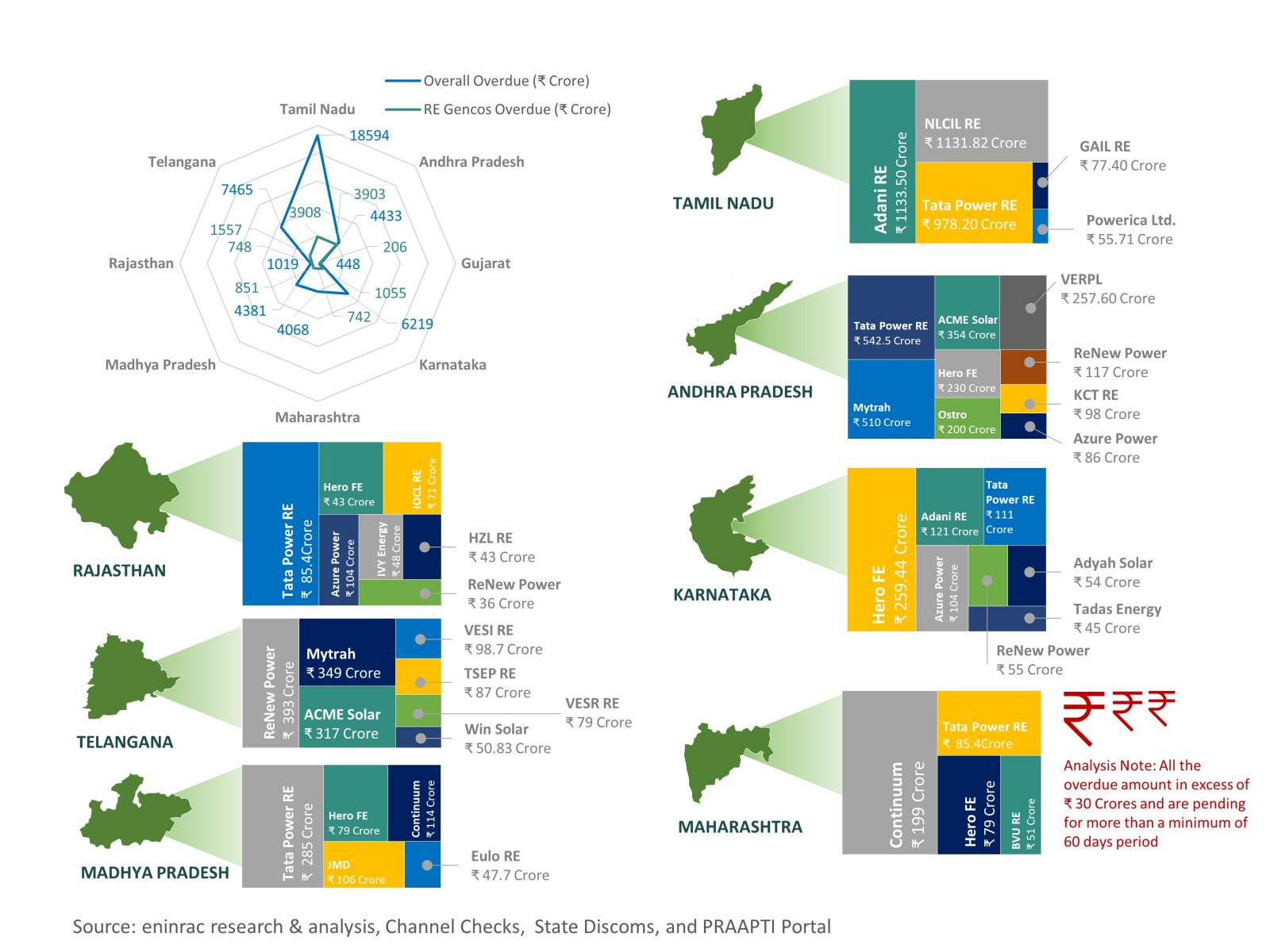